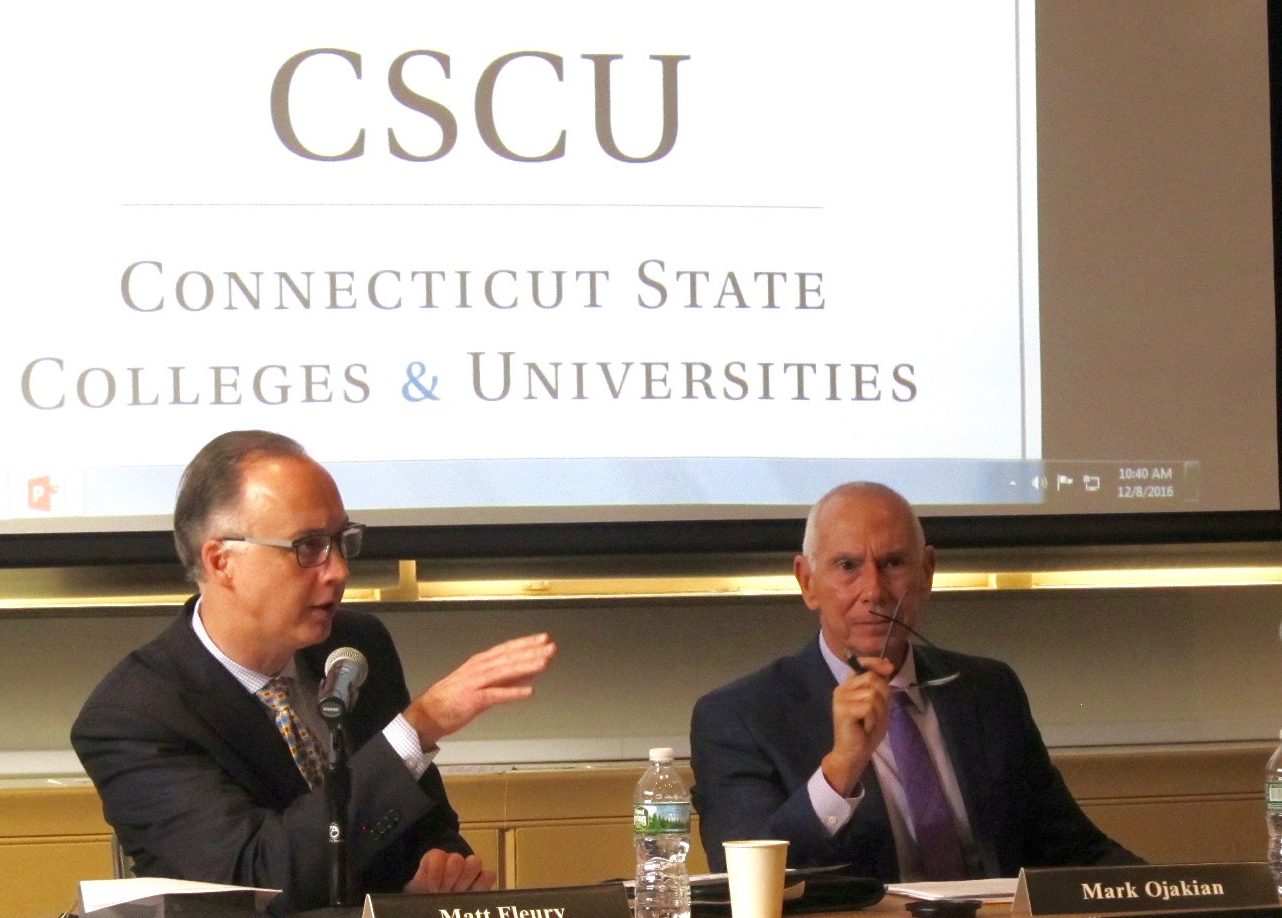 Board of Regents Chairman Matt Fleury and President Mark Ojakian

Mark Ojakian, who took over as the leader of the state’s largest public college system amid turmoil last year, has won something his predecessors were unable to achieve – a contract extension from the system’s governing board.

The Board of Regents for Higher Education voted unanimously Thursday to extend Ojakian’s contract through Aug. 31, 2020.

As the governing board privately discussed his future within the 85,000-student system, Ojakian had been coy.

“I’ve had a great experience, and it’s really been a team effort,” Ojakian, 63, said of his first 14 months on the job. “I love going onto campuses, and I love meeting and talking with students.”

Ojakian took the helm of the state’s 12 community colleges and four regional Connecticut state universities after a series of missteps by the newly created system’s first two presidents.

Ojakian hopes to calm the storm at CSCU, yet make merger workBoard of Regents planning for departure of its presidentWhat brought down Kennedy and Meotti?

With no prior experience in higher education, but equipped with years of political experience as the governor’s chief of staff, deputy budget director and deputy state comptroller, Ojakian has managed to establish a sense of stability among staff within the system.

Regents President Matt Fleury said Ojakian had done “exceptional work of getting us on the rails so that we are positioned to do the things we have to do.”

With the contract extension, Ojakian is poised to become the longest-serving president of the collection of  17 colleges that was merged into one system five years ago.

Asked how he thinks his first 14 months have gone, he pointed to the work that remains.

“I think what we have been able to do is build some stability and rebuild some relationships,” he said. “My job is to make it easier for the students to achieve their goals.”

Ojakian, who makes less than his predecessors, said he did not expect a pay raise to stay on the job. “I am very grateful for the salary that I receive,” he said, noting all the fiscal challenges the system faces. “I am not looking for any sort of increase.”

“Thank you for your vote of confidence,” he said. “I will not disappoint you moving forward.”