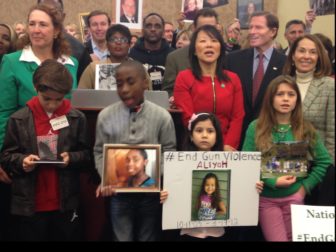 Relatives of victims of gun violence at a Washington, D.C., press conference Thursday. Joining them were members of the Connecticut congressional delegation, including Rep. Elizabeth Esty, D-5th District, at left, and Sens. Chris Murphy and Richard Blumenthal, at rear.

Washington – On their first pilgrimage here since the election, relatives of the victims of the Sandy Hook Elementary School shooting and of other incidents of gun violence and their allies asked President-elect Donald Trump to abandon his hard-line stance against gun control.

But chances of that are slim.

A press conference Thursday at the U.S. Capitol organized by the Newtown Foundation and other gun control groups brought together family and friends of the Sandy Hook shooting victims and those of victims of gun violence across the nation.

There were family members of victims of mass shootings, such as the massacres at Virginia Tech; Orlando, Fla.; San Bernardino, Calif.; and Aurora, Co.; as well as those of gang violence, domestic violence and suicide. Many had made lobbying trips to Washington several times since the  Dec.. 1, 2012, Sandy Hook shootings, some nearly a dozen times.

Each promised to “honor with action” the loved ones whom they lost.

“There would be good reason for people to be desolate and even despairing,” said Sen. Richard  Blumenthal. “Shortly we’ll have a new president, not like President Obama and hardly committed to the cause of ending gun violence. But there is a moment of opportunity here. and my hope is newly elected stand with us.’”

But Trump has a big debt to the National Rifle Association.

The NRA pumped $38 million into electing Trump, spending that money mostly on ads attacking Hillary Clinton. It also spent another $24 million to ensure the GOP remained in control of the Senate.

Sen. Chris Murphy, D-Conn., conceded it may be tougher than ever in the new Congress to win approval for the gun control measures promoted by advocates seeking to broaden FBI background checks of gun buyers and ban those on government terrorism watch lists from purchasing weapons.

The NRA is expected to try to push in the next Congress for legislation that would extend the right to carry a concealed firearm in any one state, no matter how minimal the licensing standards, to all 50.

In his book “Crippled America: How to Make our Country Great Again,” Trump said he supports a national right-to-carry law.

Murphy said gun control advocates “may be on the defensive” here, and on the offensive in the states where voters approved three out of four ballot initiatives in the last election.

“We will change one state at a time,” Murphy said.

Murphy also said the modern gun control movement did not begin its work until four years ago when 20 first-graders and six educators were killed at Sandy Hook Elementary School by Adam Lanza.

“We have to play a lot of catchup,” with the NRA, Murphy said.