One study finds Connecticut a fine place to do business 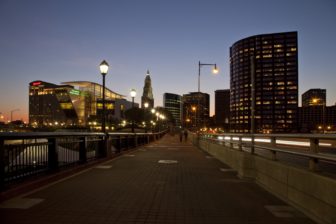 There’s been no shortage of criticism of Connecticut’s business climate in recent years as the state recovers slowly from the Great Recession.

But a new study issued this month by the Council on State Taxation concludes Connecticut actually is tied for the most favorable business climate — if one considers not just the cost of doing business, but the potential for earning big profits here.

And while the report has its supporters and critics, it shows the task of evaluating Connecticut’s readiness to do business is not simple.

Only Alaska and North Carolina can also boast a ratio this low, which is well below the national average of 4.6 percent.

“Connecticut is home to several high-output industries, including insurance, financial services and aerospace,” the report states. “Connecticut’s economy generates a large amount of GSP and gross operating surplus per worker, meaning that while Connecticut imposes higher-than-average taxes on a per-worker basis, its business taxes are significantly below the national average when measured per dollar of GSP.”

Catherine Smith, commissioner of the state Department of Economic and Community Development, said the study recognizes some crucial aspects of Connecticut’s business climate.

“We do produce high-quality goods and services,” she said, citing the financial services sector as one example.

“We’re high value in many ways,” the commissioner said, adding that while business costs here exceed the national average, “you also get very high quality workers in terms of the degrees they have.”

Smith added that Connecticut under Gov. Dannel P. Malloy’s administration has made significant investments in local and higher education, in part because businesses here have identified this as a top priority.

The COST report also noted that “these results should not be interpreted to mean that Connecticut is a low-tax environment overall.” 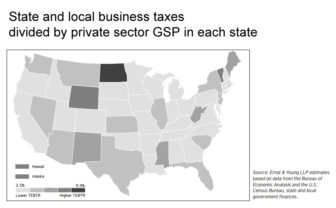 From the Ernst & Young report.

Joseph F. Brennan, president and CEO of the Connecticut Business and Industry Association, said that last comment is key. While there are many factors that shape a state’s economic climate, business costs in general — and state and local tax policy in particular — are crucial.

“Connecticut is a tremendous place to do business, and we have amazing assets here,” Brennan said. “But we are competing in a global environment, and when it comes to taxes, we really have to try this year not to make it any worse.”

Forbes magazine ranked Connecticut’s business costs as 45th worst among the states this year, and the overall business climate was listed at 43rd.

CNBC reached a similar conclusion in its rankings, placing Connecticut’s business costs at 47th and its overall ranking at 43rd.

The news also has been mixed this year when it comes to the job market.

The state Department of Labor recently reported a 4.7 percent unemployment rate for November, down a full percentage point from November 2015. But it also noted that the state has added just 1,400 jobs overall for the calendar year, an increase of just 0.1 percent.

“Connecticut’s rapidly declining unemployment rate is welcome news,” Andy Condon, director of the labor department’s Office of Research said earlier this month. “However, recent months of payroll job counts may indicate a significant slowing of the state’s job growth. While there are circumstances, such as demographic shifts, increased self-employment and growing out-of- state commuting, where these two movements can happen at the same time, we do not yet have data to support a definitive trend.”

Brennan and Durham economist Don Klepper Smith with DataCore Partners both said Connecticut’s tax burden remains a concern and that an unstable state budget outlook can have a chilling effect on businesses’ willingness to add workers, expand products and services, and to make capital investments.

“That sense of fiscal discipline (in state and local government) is a key ingredient to business confidence,” said Klepper Smith, who was chief economic adviser under Gov. M. Jodi Rell. “Business confidence is a rather complex entity.”

Klepper Smith did add, though, that, “There are some positives that are undeniable” about Connecticut, including a high-quality workforce, proximity to major metro areas such as New York and Boston, and the high per capita wealth of its consumers.

Malloy already has warned legislators that he does not intend to recommend any major tax hikes on Feb. 8 when he delivers his budget proposal for the next two fiscal years.

The legislature’s nonpartisan Office of Fiscal Analysis estimates that state finances, unless adjusted, are on pace to run nearly $1.5 billion in deficit in 2017-18 and $1.6 billion in the red in 2018-19.