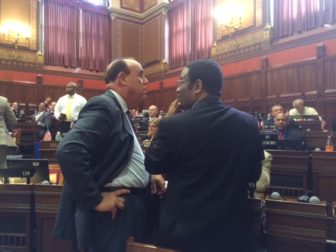 Reps. Stephen Dargan, left, and Bruce Morris during a debate on a police excessive force bill.

The Democrats’ slim majority in the state House of Representatives grew slimmer at 1:31 p.m. Tuesday when Rep. Stephen D. Dargan, D-West Haven, handed in a resignation letter, a precursor to accepting an appointment to the Board of Pardons and Paroles.

Gov. Dannel P. Malloy intends to nominate Dargan, the long-serving co-chair of the legislature’s Public Safety and Security Committee, to a $92,500-a-year position on the board, filling the vacancy left by the resignation of Kenneth Ireland.

Dargan notified the secretary of the state’s office Tuesday he would not take the oath for a new term Wednesday with the rest of the General Assembly. Had he taken the oath, he would be barred from accepting a job in state government for his two-year  term.

The House Democratic majority will shrink to 78-72, meaning the defection of three Democrats on any partisan vote would result in a 75-75 tie, at least until a special election is held to fill the vacancy.

“Stephen Dargan has dedicated his career to the safety of our communities – from serving for over two decades as a fire commissioner in West Haven, to his twenty years as co-chairman of the state legislature’s Public Safety Committee, which oversees all matters relating to civil preparedness, the state and municipal police, and the overall safety of our residents,” Malloy said in a statement. “He is highly respected among his colleagues for his evenhandedness, knowledge and understanding of the criminal justice system, and dedication to the people of our state. He brings unique insight to this position and is certain to be a good addition on our state’s Board of Pardons and Paroles.”

Dargan was offered the post last week, but hedged at leaving the General Assembly after 26 years. The nomination is subject to legislative confirmation.

“I didn’t sleep last night,” Dargan said. “I’ve been going back and forth, because of the emotions.”

With 22 years as co-chair, Dargan is the longest-serving committee leader currently serving.

He took office in 1991, the year Lowell P. Weicker Jr. became governor and closed a deep budget shortfall with the state’s first tax on wages. Dargan voted against the income tax. He leaves during another budget crisis.

“It could be a difficult year, too,” Dargan said.

In addition to the salary, the appointment brings the prospect of a pension enhancement, since the final five years of an ex-legislator’s salary is part of a pension calculation.