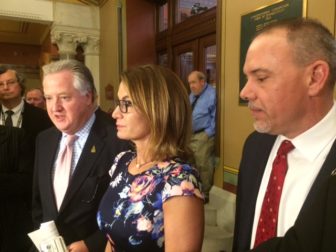 Rep. Joe Aresimowicz, D-Berlin, can expect to be elected speaker of the House on the first day of the 2017 legislative session Wednesday without either opposition or support from the growing Republican minority – a calculated, if subtle, protest of Aresimowicz’s continued employment by a major public-sector union, AFSCME Council 4.

House Minority Leader Themis Klarides, R-Derby, told CT Mirror on Tuesday she has refused a request by Aresimowicz to second his nomination as speaker, a bipartisan gesture often, though not always, made when the House elects its top leader at the start of a new two-year term.

The GOP minority has concerns about Aresimowicz’ simultaneous roles as speaker and education coordinator of Council 4, despite the Office of State Ethics having informally advised him last week that the ethics code does not prohibit him, as a part-time lawmaker, from keeping his union job, Klarides said.

“It certainly says he has every right to keep his job and be speaker, but we have concerns with it. There is a perception issue, so I felt it was best I didn’t do that,” Klarides said of seconding the nomination.

Aresimowicz said Klarides informed him of her decision Tuesday. He described the development as party politics “spilling into the chamber.” The Republican State Central Committee passed a resolution last month calling for Aresimowicz to choose the union job or the speakership.

“I understand it. I don’t have to like it,” he said. “It will not affect the way I deal with the chamber.”

With a net gain of eight seas in November, the Democratic majority shrank from 87-64 to 79-72. On Wednesday, the margin will be even tighter with the decision by Rep. Stephen D. Dargan, D-West Haven, to resign as a member-elect so he could accept a job in the executive branch. Until a special election, the Democrats will have a 78-72 majority, meaning the defection of three Democrats on any issue would force a tie.

House Speaker J. Brendan Sharkey, D-Hamden, will preside over the opening of the House session and be in the chair until a new speaker is elected. Klarides said her research showed that the election of a speaker is not debatable, meaning speeches will be limited.

Aresimowicz said he believed Sharkey would allow Klarides to address the chamber before the vote if that is her wish. One of Klarides’ predecessors, Robert Ward, did not offer a seconding speech when James Amann, a Democrat, was elected speaker in January 2005.

Klarides, meanwhile, made her 2017 committee assignments, stripping Reps. Tim Ackert of Coventry and Rob Sampson of Wolcott of their leadership positions. With Sampson’s backing, Ackert had unsuccessfully challenged Klarides for House GOP leader.

The Senate will open its 2017 session evenly divided as Democrats and Republicans each won 18 seats in November.

Senate President Pro Tem Martin M. Looney, D-New Haven, and Senate Minority Leader Len Fasano, R-North Haven, struck a power sharing agreement last month in which Looney will be re-elected as the top leader, president pro tem, but the GOP will have a voice in setting the Senate agenda.

The deal reflects the advantage still held by Democrats: the ability of Lt. Gov. Nancy Wyman, a Democrat who presides over the Senate, to break ties.

Looney, who underwent a kidney transplant five days before Christmas, intends to take the oath of office on Wednesday, an act to be witnessed by one of his transplant surgeons, with a special appearance by another key player in his transplant. The oath will be administered by Superior Court Judge Brian T. Fischer, the friend who gave Looney one of his kidneys.