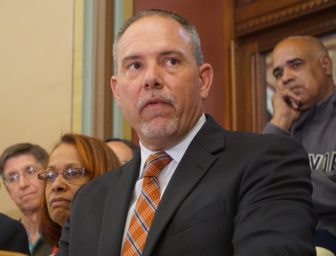 The Office of State Ethics has advised Rep. Joe Aresimowicz, D-Berlin, that nothing in the state ethics code bars him from continuing his job as education coordinator with AFSCME, an influential public-employee union, once he becomes speaker of the House of Representatives.

Aresimowicz, 46, now the House majority leader, is the choice of the Democratic majority to be elected speaker Wednesday when the General Assembly opens a  2017 session in which legislators will face pressure to cut labor costs as they confront a budget shortfall exceeding $1 billion.

Based on state ethics laws and precedents involving other speakers, the ethics opinion is unsurprising. The conflict-of-interest standard is narrow, turning on whether members of the part-time legislature derive a direct financial benefit from their official duties.

“In sum, there is simply nothing in the Code— nor in the more than thirty-five years of precedent interpreting it— that would bar Representative Aresimowicz from serving as Speaker while engaging in his pre-existing employment relationship with the union, or from taking official action on union matters in the absence of a direct financial impact on himself or his family members,” Brian J. O’Dowd, the deputy general counsel of the Office of State Ethics, wrote in an opinion dated Dec. 28.

As are the case with staff opinions, it is considered informal and a source of guidance, not a directive. Formal advisory opinions issued by the Citizens Ethics Advisory Board are binding.

Aresimowicz, a legislator for a dozen years, has been on the staff of AFSCME Council 4 for 18 years. He had indicated last spring, when House Speaker J. Brendan Sharkey announced a retirement that made Aresimowicz the favorite to succeed him, that he would seek guidance from the Office of State Ethics on potential conflicts, as have at least three of the past five previous speakers.

He said Friday he did not want to ask for the opinion before his caucus formally endorsed him for the position last month, after Democrats retained control of the House.

His office requested the opinion Dec. 8, two days after the Republican State Central Committee unanimously adopted a resolution stating that his outside employment was “an untenable conflict in his ability to properly lead the House of Representatives and confront the insurmountable and rising costs of employee labor agreements, pension contributions and health care costs.”

The resolution put Aresimowicz on notice the GOP will make his employment an issue as it tries to build a case for electing a Republican majority in 2018. Republicans picked up eight seats in November, leaving Democrats with 79-72 advantage. 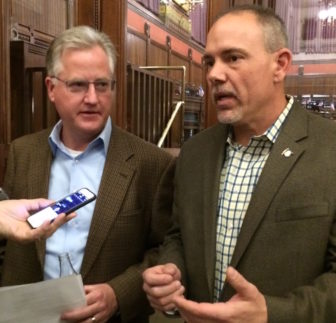 J.R. Romano, the state Republican chairman, said Aresimowicz should come under close scrutiny on labor issues, regardless of the ethics code or the opinion.

As speaker, Aresimowicz controls what business is debated by the House, including the question of whether state employee contracts and arbitration awards will be subjected to a vote of legislators, a rare occurrence that Republicans say should be standard practice. Labor deals can be rejected by the legislature; in the absence of a vote, they take effect by default.

“This is one of the circumstances where him being in that position is a major, major problem,” Romano said. “We’ve never said he can’t be a legislator. It’s just the fact as speaker he gets to control the calendar.”

Aresimowicz said the speaker is the final word on what business is placed before the House, but those decisions are made collaboratively.

“The reality is that if the speaker was to stand in the way of an issue of importance to his caucus… it would be a very short term as speaker,” he said. “So the ability to control the calendar, which is technically accurate, is not politically accurate.”

Aresimowiz, who plays no role in negotiating state employee contracts for AFSCME, said he will make decisions about placing contracts before the House on a case-by-case basis.

No union agreement or arbitration award has been rejected by the General Assembly in two decades, although a tentative contract granting raises to non-teaching staff at the University of Connecticut was withdrawn last March after legislative leaders indicated it would be rejected by lawmakers.

The request for an opinion from Cara Passaro of the House majority office described Aresimowicz’s union job as overseeing education and training programs, not collective bargaining. It also stated he understands he may not use “state resources or his state title in his outside employment.”

“Based on these facts, would you please let us know whether there are any apparent ethical issues arising from his employment, including a conflict of interest with his legislative duties?” Passaro asked. “If there are any further actions that Rep. Aresimowicz should take to protect himself from ethical concerns, we would appreciate that advice.”

O’Dowd replied that nothing bars Aresimowicz from holding both jobs — “particularly given that his outside work for the union preceded both his election to his current term and his expected election to the position of Speaker.”

AFSCME Council 4 represents 32,444 workers, mostly in municipal and state government, according to the union’s most recent filing with the U.S. Department of Labor. The same filing showed AFSCME paid Aresimowicz a gross salary of $97,112 in 2015.

In the fiscal year ending June 30, his legislative earnings as majority leader totaled $44,417. Base pay for House members is $32,500, which includes a $4,500 flat allowance for expenses. Leadership positions come with higher pay.

Aresimowicz said his support of organized labor is based on lifelong beliefs, not his paycheck.

“The big thing for me is I grew up  in a union household. My father was an organizer for the Teamsters. It was part of my core beliefs growing up, that workers deserve a voice in the workplace,” he said.

He became the president of an AFSCME local representing Red Cross workers within a year of being hired there after service as an Army medic. That led to his joining AFSCME’s staff.

“Are there times when my job as speaker of the House and the representative from the 30th District will challenge my core beliefs? Sure,” he said Friday.

He broke with AFSCME and other labor unions in 2016, supporting an austerity budget that required layoffs of state employees. That led to sharp public criticism by Sal Luciano, his boss at  AFSCME, and opposition by some AFSCME members to his endorsement by the AFL-CIO.

Rep. Christopher Donovan, D-Meriden, was employed by an affiliate of the Service Employees International Union representing community college employees while he was majority leader, but he resigned from the union after becoming  speaker in January 2009. “I’d be more in the limelight, and my opponents would use my job as a reason to put into the public eye questions about my motivations,” he said.

Klarides could not be reached Friday. In May, when the CT Mirror first explored Aresimowicz’s potential conflicts, she said his dual roles as speaker and a union employee would be awkward at times, but he was within his rights staying with his long-time employer.

“Each speaker has had different issues based on what you do for a living,” Klarides said.  “As long as you have a part-time legislature, you’re going to have those issues.”