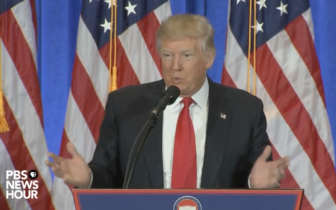 Washington – President-elect Donald Trump took another swipe at the F-35 program Wednesday during his first press conference since November’s election.

“It’s way behind schedule and billions of dollars over budget,” Trump said of the Joint Strike Fighter program. “I don’t like that.”

In a statement, the plane’s builder, Lockheed Martin, said, “We understand President-Elect Trump’s concerns about the F-35 program, and we’ve given him our full commitment to drive down cost aggressively.”

The engine for the F-35 is made by Pratt & Whitney.

Trump has slammed F-35 cost overruns in a series of tweets and indicated he might look at the Boeing F-18 Super Hornet, which is powered by a General Electric engine, as a substitute.

But on Tuesday, Trump said he also may review the Super Hornet program.

This has not been a good week for the Joint Strike Fighter program.

Gilmore made the suggestions in a letter to House Armed Services Committee Chairman Mac Thornberry of Texas, who’s a strong supporter of the F-35 since Lockheed Martin produces the fighter in his state.

In addition, Pentagon acquisition chief Frank Kendall informed Sen. John McCain, R-Ariz., this week that developmental test flights for the F-35 could be pushed back to May of 2018 from original plans to complete the System Development and Demonstration phase in October of 2017.

“The F-35’s dismal record on cost, schedule, and performance is a predicable consequence of a broken defense acquisition system,” said McCain, the head of the Senate Armed Services Committee.

Lockheed Martin CEO Marllyn Hewson met with Trump on Dec. 21 and promised she was personally committed “to drive down costs aggressively.”

In a statement released Tuesday, Lockheed Martin said, “We are fully committed to delivering the best capability possible at the best value for the American taxpayer.”

“The price of an F-35A has come down 60 percent from the first lot contract to the recent ninth contract, and we fully expect the next contract will show another significant price decrease,” the company said

Lockheed Martin also said it is working to reduce the cost of the program by $5 billion through 2022.