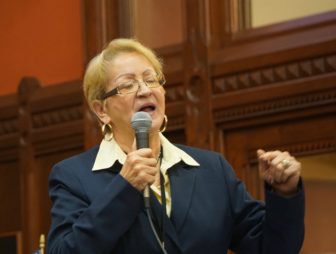 “She recognized we have a lot of problems in the court,” Gonzalez said.

But Gonzalez led opposition in the House to at least five others, including three other family court judges, Corinne L. Klatt, Jose A. Suarez and Gerard I. Adelman. All were confirmed by wide margins:  Klatt, 120 to 16; Suarez, 124 to 22; and Edelman, 117 to 28.

She also cast the only votes in the House against the confirmation of two other judges, Bruce P. Hudock and Robert J. Devlin.

She criticized the light prison sentence Devlin imposed on a former police officer in a sexual assault case, but Rep. Tom O’Dea, R-New Canaan, said the sentence was three-and-a-half years and near the top end of a plea deal that set a sentencing range of nine months to four years.

O’Dea said Devlin is widely regarded as a top jurist in Connecticut.

Rep. William Tong, D-Stamford, the co-chair of the Judiciary Committee, said the panel examined questions of temperament and diligence, but should not and would not act as an Appellate Court substituting its judgment for a jurist.

“The public process and the committee process works,” Tong said.

One judge, Stanley Fuger Jr., opted to retire rather than continue pursuing confirmation as senior judge, a semi-retired status.