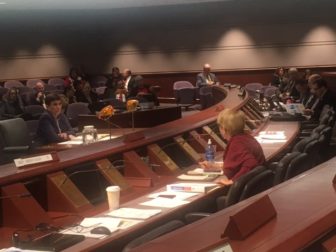 Michael Nowacki, a retired CBS television executive, emailed the alert last weekend. It went to a loose network of litigants aggrieved by epic child-custody battles and united in their disdain of Connecticut’s family courts: Some of their least favorite judges were coming up before the legislature’s Judiciary Committee for reappointment.

The email was enough to bring Michael and Maureen Martowska to Hartford from their home near Cape Cod. The judges seeking reappointment included Jose A. Suarez and Gerard I. Adelman, two of the 10 jurists who played roles in their son’s custody battle, now entering its 12th year.

Nowacki’s custody fight lasted a decade. His son and daughter are in college now, young adults free to decide the time, place and circumstances of parental visits without judicial review. Their father is still fighting, a man willing to wait 10 hours to speak for three minutes to legislators about judges he wants off the bench.

On Wednesday, Nowacki was one of about about two dozen family court litigants who settled in for a long day in Room 2C of the Legislative Office Building. Based on past experience, they can expect to see the Judiciary Committee vote Friday to recommend most, if not all, the jurists for another eight-year term on the bench.

They know that some of the judges think they are crazy.

Their champion on the Judiciary Committee is Rep. Minnie Gonzalez, D-Hartford. One of the non-lawyers on the committee, she takes their suggestions about lines of questioning she can pose to judges.

“We know one person who is willing to ask tough questions,” Nowacki said.

It’s a role Gonzalez has been playing for at least five years, one that puzzles judges and fellow legislators. Gonzalez, 66, who migrated from Puerto Rico to Hartford 35 years ago and quickly jumped into politics, represents one of Connecticut’s poorest legislative districts, a place where she says no one has the money for 12-year custody battles.

“People say, ‘You’re Latina, why do you care?’ I care because I don’t think it’s fair,” Gonzalez said.

She has taken to visiting family courts, watching the judges. She says she makes the trips twice a week, not entirely giving up the visits while temporarily confined to a wheelchair after breaking a leg.

Her 33-year-old son died in 2014 in the midst of her emotional lobbying of colleagues for a bill to limit the use of court-appointed guardians in custody cases. After a 10-hour hearing this week, Gonzalez said the loss helps her identify with the litigants.

Gonzalez accuses the court system of bankrupting litigants who cannot resolve custody fights. Judges, she said, pick from a “clicque of lawyers” for work as guardians ad litem, lawyers who represent the interest of minor children. Their bills are paid by one or both parents.

Elizabeth Bozzuto, the chief administrative judge of the family court system, told legislators that the court resolved 92 percent of custody cases within a year in fiscal 2016 — and the average case was resolved in 4.7 months, down from 6.3 months in 2014.

Reforms passed by the legislature in 2014 — a compromise version of Gonzalez ‘s bill passed unanimously in the House — have reduced the use of guardians ad litem. The number of guardians appointed dropped from 1,594 in 2013 to 889 in 2016, and 83 percent of the appointments were by the agreement of the litigants.

The court system has increased the use of family relations counselors, court employees whose services are provided without cost, Bozzuto said.

Only 2 percent of the custody cases are so contentious that visits by a non-custodial parent are made under court-ordered supervision. They are the outliers, as are the cases that drag on until the children reach age 18 and no longer are minors.

“No one gains or wins,” Bozzuto said.

Sen. John Kissel, R-Enfield, a co-chair of Judiciary, said the system itself becomes the enemy for a small but passionate group of litigants.

“I think that sometimes people get caught up in the system as opposed to the more fundamental issue as to how they can either win back custody of their children or resolve matters with their spouse,” Kissel said. “I’m not saying that’s necessarily wrong all the time. People, if they feel they’ve be been wronged, want to feel vindication. But then the battle with the institution becomes bigger than ‘How can i resolve these family issues.’ ”

Bozzuto, who is up for reappointment, has an unhappy distinction in the Judicial Branch: She appeared in another judge’s court a year ago as the victim of a crime. Bozzuto spoke at the sentencing of Ted Taupier, a family-court litigant convicted of threatening Bozzuto.

Taupier was found guilty of writing an email in which he discussed the logistics of firing on Bozzuto’s home with a rifle and warned that the court system will change only when court officials “figure out that they are not protected from bad things and their families are taken from them.” 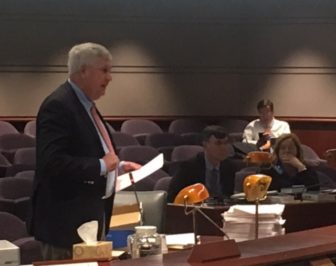 The email was circulated among a half-dozen associates and not sent to the judge. Norm Pattis, who is representing Taupier on appeal, said the language was irresponsible bluster among friends, not a threat.

“There is no doubt that family court is the most challenging assignment in the Judicial Branch,” Bozzuto told the legislators.

A half-dozen people later would urge lawmakers to reject her reappointment.

“They hand the children to abusive parents, the way most judges do,” Martone said.

Watching was Judge Patrick L. Carroll III, the chief court administrator who gave Bozzuto her assignment. He said social media attacks on family court judges are on the rise.

In one recent case, a fake Twitter account was established in the name of a lawyer who practices family law. Twitter suspended the account in days, but not before a series of tweets defamed the lawyer and two family court judges as delivering children to pedophiles.

On Wednesday, two Capitol police officers were stationed in the hearing room. One witness who signed up to speak against a judge was ejected after yelling at the committee.

Nowacki, who was arrested five years ago and removed from a judicial confirmation hearing for refusing to stop speaking after his allotted three minutes expired, was the final witness Wednesday night.

He stepped to the microphone with a small handcart bearing three boxes of documents. He began piling documents on the witness table.

He urged them to block the reappointment of Judge Bruce P. Hudock, whom he says botched the handling of a criminal case arising from his divorce. Nowacki’s conviction was overturned by the state Appellate Court, and Nowacki is now seeking damages.

Nowacki told them he knows they’ll do nothing. He told the legislators the boxes contained 3,850 pages of transcripts he had amassed in his various court proceedings. He called them “the detritus of deceit.”

It’s the title, he said, of a book he is writing.