CT friends and foes of Trump give inauguration mixed reviews

Washington – With a light rain falling, President Trump took the oath of office Friday and gave an inaugural address painting a dark picture of America that was panned by many Democrats but praised by his supporters.

Trump said he would stand up for “forgotten” Americans and “put America first.”

He said the inauguration was more than a peaceful transfer of power.

“We are transferring power from Washington and giving it back to you, the people,” Trump said.

Gov. Dannel P. Mallloy, who attended the inauguration and was seated with other governors on the West Front Capitol lawn, said he was disappointed Trump’s first address to the nation as president was no more than “a shortened version of his campaign speech.”

“It wasn’t a policy speech and it wasn’t an outreach,” Malloy said. ”Like many Americans, I wanted Donald Trump to pass from campaign mode to being the president of the whole country.”

Trump said that for decades the United States has “enriched foreign industry at the expense of American industry,” and subsidized foreign armies “while allowing for the very sad depletion of our military.” 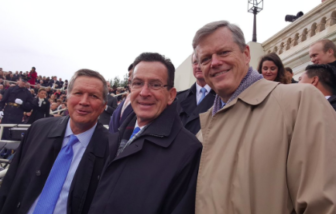 “We’ve defended other nations’ borders while refusing to defend our own; and spent trillions of dollars overseas while America’s infrastructure has fallen into disrepair and decay,” Trump said in his defiant speech.

Sen. Chris Murphy, D-Conn., a member of the Senate Foreign Relations Committee, said Trump’s speech may worry U.S. allies because “it was a call for isolation.”

“But there was certainly a lot of red meat for his supporters,” Murphy said.

“Now the question is ‘can he deliver?’” Murphy asked.

“We’ll have to see what actually is done,” he said.

Republican State Rep. Tony D’Amelio, who represents Middlebury and part of Waterbury, had a different take.

“Overall it was a great speech,” he said. “The crowd was roaring when he talked about jobs.”

D’Ameiio said he liked Trump’s calls for unity, especially when the new president said, “we all bleed the same red blood of patriots.” 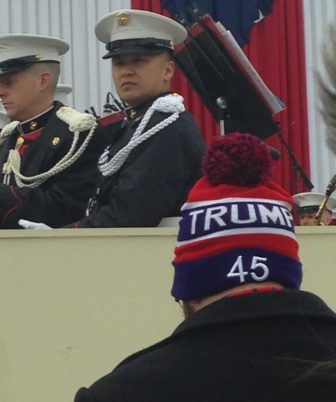 A Trump supporter shows his allegiance.

To Cathy Wallingford of Stamford, who voted for Trump and said it was her first inauguration, Trump’s address signaled he would “be a strong leader” who would look out for the welfare of  American workers.

“I liked that he said he would work for us, not the establishment,” she said.

The inauguration attracted a bigger than usual crowd of protesters, who tried to block the checkpoints to the Capitol lawn and momentarily shut down roads around the Capitol

One protester from the group “Code Pink” managed to get to the front of the crowd, shouting “you are not a legitimate president,” before being whisked away by Secret Service agents.

Tania Maduro of Groton moved to Washington last year to join Democracy Spring, an organization that practices civil disobedience to promote voting rights and other issues and was one of the groups protesting the inauguration.

Maduro said the protesters were motivated by fears Trump would strip Americans of “basic democratic norms,” including freedom of the press and voting rights.
“We just can’t sit by idly,” she said.

While some Democrats boycotted Trump’s speech, all of the members of Connecticut’s congressional delegation attended.

Some of them, however, did not attend the traditional Congressional Lunch in the Capitol to honor Trump and Vice President Mike Pence. 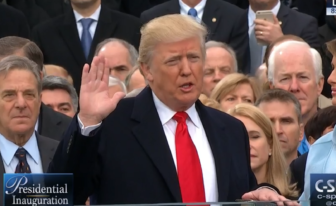 Murphy and Blumenthal were among the no-shows, but Rep. John Larson, D-1st District, did attend, shaking hands with Pence and trading a few words with Trump.

Connecticut’s Democratic lawmakers are largely skipping the rest of the pomp and pageantry of inauguration day.

But D’Ameilio said he had tickets to one of the two official inaugural balls, called the Liberty and Freedom Ball. Trump and his wife Melania will attend that ball and the other official party, the Salute to Our Armed Services Ball.

There are more than a dozen other unofficial balls and parties scheduled to celebrate the inaugural, usually sponsored by special interests.

But Blumenthal preferred to host a small party for some of the Connecticut residents who will march in Saturday’s Women’s March to protest Trump’s policies.

Organizers of the march say about 4,500 Connecticut residents will participate. Those participants will include Blumenthal and other members of the Connecticut congressional delegation.

The west front of the Capitol during the inauguration ceremonies