Blumenthal: Stripping federal funds from sanctuary cities would be ‘illegal’ 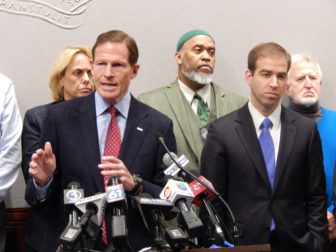 “Cutting off funding to Hartford or any town or city in Connecticut would be illegal,” Blumenthal said. “Under these executive orders, it would be illegal for the federal government to deny funding.”

Blumenthal’s statement came in a packed committee room in the state Legislative Office Building in Hartford, where dozens turned out in a demonstration of opposition to Trump’s latest executive actions on immigration.

Blumenthal said he anticipates there will be legal challenges to Trump’s executive order on sanctuary cities, which he said may not be constitutional.

Several bills have been introduced in Congress to give the Trump administration clear authority to act. Blumenthal said he would use “any tool available” to stop that legislation from passing and did not rule out a potential filibuster.

“I’m not saying specifically what we would do,” Blumenthal said. “But certainly I would have to be joined by my colleagues in that effort.”

Hartford Mayor Luke Bronin said his city, which is one of several in Connecticut that has declared itself a “sanctuary” city, would not change its enforcement policy despite the new federal pressure.

But Bronin said he did not know what to expect in the coming days and weeks.

“The senator asked me to come and speak about the effects of these orders in Hartford, and the truth is, I can’t,” Bronin said. “Nobody can, because it’s very unclear what they mean. I’m not sure the Trump administration knows what they mean. There is enormous ambiguity in the orders.” 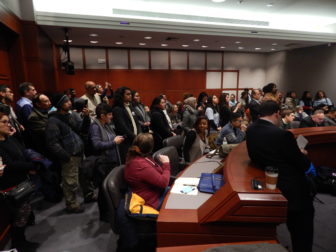 Dozens packed into a committee room in the state Legislative Office Building in Hartford during the press conference.

The ambiguity primarily has arisen from the definition of sanctuary city in Trump’s executive order. It states that the attorney general has the power to designate jurisdictions that are not compliant with federal immigration laws, but whether any jurisdiction in the country falls into that category remains uncertain.

Blumenthal said no jurisdiction does.

“No one is breaking the law,” Blumenthal said. “No city, no state is violating these executive orders or the law.”

Sanctuary cities do not typically cut off communication with federal immigration authorities. Instead, they choose not to ask about the immigration status of some individuals who have been detained. In Connecticut, law enforcement officers are only required to obtain an individual’s immigration status if a violent felony has been committed.

Bronin said if the Trump administration is under the impression cities like Hartford are shielding undocumented violent criminals, it is mistaken.

“We don’t shield any violent offender from justice for any reason, certainly not based on immigration status,” Bronin said. “But what we also don’t do is target families and individuals who call our community home because of their immigration status.”

Blumenthal said the best way to fight the Trump administration on immigration policy is through the congressional appropriations process and public demonstrations of opposition.

Carlos Moreno, a spokesman for the Connecticut Immigrant Rights Alliance, estimated that there have been nine or 10 separate pro-immigration protests in Connecticut since Trump’s inauguration, including Friday’s demonstration after the press conference.

Alok Bhatt, an activist with the Connecticut Immigrant Rights Alliance, said while he appreciates the support from legislators, major changes will not come if the protests do not continue.