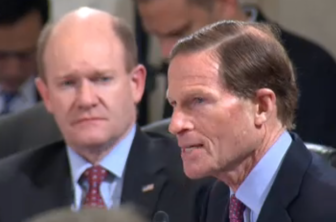 Washington – Sen. Richard Blumenthal joined Democratic colleagues on the Senate Judiciary Committee Wednesday in calling for the rejection of Sen. Jeff Sessions as the next U.S. attorney general.

“Senator Sessions has publicly opposed marriage equality claiming ‘it weakens marriage,’ and even tried to eliminate protections for LGBT Americans in the Runaway and Homeless Youth Trafficking Prevention Act,” Blumenthal said during the panel’s meeting to vote on the nomination.

Blumenthal continued with a list of objections to the nomination that included Sessions’ opposition to hate crime legislation and “even defending President Trump’s shocking video about engaging in sexual assault,” a reference to a 2005 recording in which Trump made crass comments about women.

Sessions told a reporter after the third presidential debate that Trump had used “very improper language, and he acknowledged that,” but said he could not characterize  Trump’s boasting about “grabbing” women’s genitals without permission “as sexual assault.”

“I think that’s a stretch,” Sessions said at the time.

However, the Alabama senator changed his position during questioning by Democrats at his confirmation hearing earlier this month, saying that behavior would constitute sexual assault.

Blumenthal also knocked Sessions for garnering support of “groups that have ties to white supremacists.”

At Sessions’ confirmation, Blumenthal asked Sessions why he accepted the Franklin Society Award from the Federation for American Immigration Reform, whose founder, John Tanton, said he hoped the United States would keep a majority white population and has made other racially insensitive remarks.

Coming on the heels of the firing of  Acting Attorney General Sally Yates – who was dismissed because she would not defend President Trump’s executive order travel ban on seven Muslim-majority countries, Blumenthal and fellow Democrats homed in on whether Sessions would stand up to a president who broke the law.

“What we saw last night is an example of what is at stake with this nomination,’’ Sen. Patrick Leahy, D-Vt., said, referring to Yates’ firing. “There is something looming over this nomination.’’

Blumenthal said, “The attorney general must be the legal conscience of the nation – he must speak out when his boss, the president of the United States, is in violation of the law.”

Republicans on the panel defended Sessions vigorously, saying he was a kind, respectful Senate colleague “who never once raised his voice against another senator,” and would scrupulously follow the law.

Sen. Lindsey Graham, R-S.C., defended Sessions against those who might oppose him chiefly because of his support of Trump.

“You can’t lose the election and expect to have the government represent what you think we should be doing,” said Graham, adding that he believes Sessions is an “honorable man.”

But Democrats spent hours bashing the nominee, saying he is weak on women’s rights and civil rights.

“I cannot assure the people of Connecticut or the country that Jeff Sessions would be a vigorous champion of these rights and liberties, and forever I stand in opposition to this nomination,” Blumenthal said.

The Senate Judiciary Committee was expected  on Tuesday to  approve and advance Sessions for a vote in the full Senate, but Democrats used a procedural move to delay the committee vote until Wednesday morning, part of a campaign to  prevent Trump from getting his full cabinet in place in a timely manner.