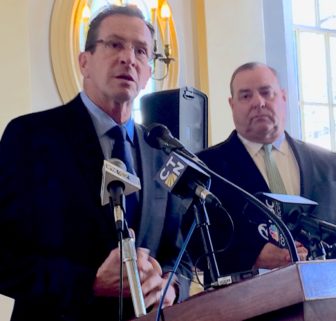 Features include a new four-tier ranking for communities under budgetary distress, enhanced state evaluation of local fiscal issues, and a limit on annual property tax increases for cities and towns deemed most at risk of fiscal insolvency.

“Our towns and cities are the foundation of a strong and prosperous state,” Malloy said during an early afternoon announcement at Waterbury City Hall. Waterbury was placed under state fiscal oversight between 2001 and 2006.

“Healthy, vibrant communities — and thriving urban centers in particular — are essential for our success in this global economy,” the governor said. “In order to have vibrant downtowns, retain and grow jobs, and attract new businesses, we need to make sure all of our municipalities are on solid fiscal ground or on the path to fiscal health.”

The state’s chief budget and policy planning agency, the Office of Policy and Management, routinely reviews annual audits for all municipalities, the governor said.

But under this new proposal, which will be outlined in greater detail next Wednesday in the governor’s new state biennial budget plan, OPM and a new state review board also would review local bond ratings, budget fund balances, mill rates and state aid levels.

The goal is to identify communities with fiscal issues well before their problems approach the level of insolvency.

“Hartford is tackling its budget challenge head on, and we’re not afraid of rigorous accountability or full transparency — indeed, we welcome it,” Bronin said. “Citizens deserve to know that taxpayer dollars are being spent wisely and responsibly, and Hartford’s books are open.  We look forward to working in partnership with the State to get our Capital City onto a stable, sustainable path to growth.”

A new four-tier system would be established, with  municipalities with the most severe challenges and risks assigned to a higher tier. With those higher rankings would come increased state focus and, hopefully, greater state-local collaboration, Malloy said.

A municipality might be assigned to one of the first three tiers if it has a poor fund balance or credit rating, or if it relies on state aid for more than 30 percent of its revenue needs. These cities and towns would face additional reporting requirements. And those in Tiers 2 and 3 also would be barred from boosting local property tax rates by more than 3 percent per year.

Those in the fourth tier, with the most severe problems, also would face the property tax cap. For these communities, the state review board could:

Communities would be assigned a Tier 4 ranking only if they request one from the state, or two-thirds of the new state review board deemed such a ranking necessary, the governor said.

The governor estimated that roughly 20 to 25 cities and towns might be assigned any tier ranking under his proposal. What is very likely, he added, is that those asked to work more closely with the state all are struggling with “pockets of poverty.”

Waterbury Mayor Neil O’Leary, who served as deputy chief and chief of the police department during the 2001-06 oversight, predicted most communities would welcome greater attention from the state.

“I know that others might be a little nervous about it,” he said, adding that Waterbury has “survived” because of the assistance it received more than a decade ago.

“I welcome the opportunity” for greater collaboration, O’Leary added. “It will give the cities who fall into these categories an opportunity to work firsthand with the state” and also will give state government “a firsthand understanding of what our challenges are.”

“We cannot wait until a city or town is on the doorstep of bankruptcy,” the governor said, adding his proposal “is the beginning of a conversation” he wants to develop further along with the General Assembly and municipal officials.

Joe DeLong, executive director of the Connecticut Conference of Municipalities, said his organization appreciated the governor’s efforts to foster dialogue and had “no issue” with his proposals, but said they should be accompanied by other changes.

“The overreliance on property taxes, especially in urban areas where most of the property is tax exempt continues to be a recipe for disaster,” DeLong said. “Oversight without the necessary structural changes, only insures that we will recognize an impending train wreck more quickly. It does not prevent the wreck.”