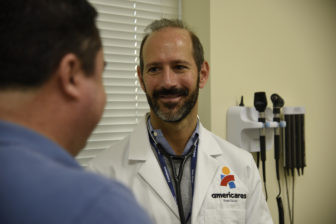 “The phones haven’t stopped ringing, and people are walking in, looking to make appointments,” Gottlieb said two days after the opening.

And Gottlieb figures that need will grow. Like others in health care, she and her counterparts at other free clinics are watching closely as Congress and President Donald Trump look to repeal and replace the federal health law, and change how Medicaid is funded.

“The thing that we are preparing for is that if the number of uninsured increases, and it seems that’s likely to be the case…we’re going to see more patients, that’s all there is to it,” Gottlieb said.

A lot at stake for Connecticut as Trump, GOP eye Medicaid changes

But uncertainty about exactly what changes could occur, and whether they would be phased in or happen quickly, makes it difficult to plan – particularly for organizations that rely on volunteers to provide care.

“We know approximately how many people we can take care of with the staff that we have right now,” said Gottlieb, whose organization operates free clinics in Stamford, Danbury, Norwalk and Bridgeport. “We’re pretty much at capacity.”

The situation is similar for Malta House of Care, a mobile clinic that provides free medical care in Hartford and East Hartford. The organization is planning for a 5 percent increase in patient visits this year – from 4,576 in 2016 to 4,800 this year.

“If we do do that, we will be running at full tilt on each of our four days of patient care,” said Michelle M. Murphy, executive director of the Malta House of Care Foundation. “As we wait and see what’s going to happen with the transition, we are thinking hard about what we’ll do if the numbers go up from there.”

Any new demand free clinics see would probably represent a change in degree more than direction. Even though the federal health law expanded coverage to millions of Americans, demand has grown at Americares, Malta House of Care, and other free clinics across the country.

“We receive phone calls every single day for clinics to open and ask, ‘How do we open?’” said Nicole Lamoureux, CEO of the National Association of Free & Charitable Clinics. “That’s not something that had stopped in the post-ACA world.”

One thing that did change: “There was definitely a decrease in donations,” Lamoureux said.

“There was a misconception, a giant misconception, that there was no more need for the services that we provided, and nothing could’ve been further from the truth,” she said.

People in ‘that terrible vice grip’

The Malta House of Care, a mobile medical clinic for the uninsured that treats thousands of patients a year in Hartford and East Hartford.

The continued demand for free clinics in part reflects the fact that some people – particularly those who are not in the country legally – are not eligible for the coverage options created under Obamacare. But many clinics also saw patients who couldn’t afford even deeply discounted health insurance, or the out-of-pocket costs the plans required when members get care.

While clinics in some states saw a decrease in patients, Lamoureux said, “As time went on, more and more people needed our help.”

Eighty-three percent of the clinics in her association reported that some patients who gained insurance came back to them because they couldn’t afford medication or their deductibles.

When the federal health law rolled out, those involved with the Malta House of Care wondered if it meant their clinic’s days were numbered.

“We would say, back in the day, ‘Gosh, maybe we’ll be put out of business,’” Murphy said. “That would be a great thing. If we were no longer needed, unlike most entities, we would be very happy.”

Instead, demand has grown consistently. “Every way you slice it, our demand is up,” Murphy said.

Many of the clinic’s patients earn too much to qualify for Medicaid.

“They’re in that terrible vice grip,” Murphy said. “They work like crazy, they have enough money to come in and pay their bills, they’re too ‘rich’ for Medicaid, but they don’t have enough to cover all the costs of life.”

Others are people in their late 50s or early 60s who have been laid off and are counting down the time until they turn 65 and qualify for Medicare.

“Though the Affordable Care Act did provide a fantastic opportunity for many, many thousands of people to get health care, it was still too expensive for many others, and many people made decisions based on the cost of the premiums and the deductibles, and maybe their health or their family’s health, to go without,” Murphy said. “We deduce, and in some cases we know, that people make the difficult choice to let go of insurance because they have no choices about food or their housing or their child care.”

If the health law undergoes major changes and people lose coverage, Murphy figures, many will turn to clinics like hers. The options for meeting increased demand could include increasing hours or adding another clinic day – but that would require lining up more time from the volunteer doctors and nurses who staff the clinic.

“We couldn’t say, ‘We’re going to add a day, let’s hire a couple more doctors.’ It’s not like that for us,” Murphy said. “The decision and the choice to add any kind of additional service is fraught with many, many other complicating factors.”

From a bus to a medical home

At Americares, the number of patient visits rose 30 percent from the 2013 fiscal year to 2016. Much of the increase was because the organization opened a new clinic in 2014, but Gottlieb said there was growth across all the sites. During the past fiscal year, Americares had 3,234 active patients, and 12,426 visits.

Many have chronic diseases.

The organization has partnerships with local hospitals, community health centers and Quest Diagnostics so patients can get specialty care and lab tests when needed.

The Stamford clinic began in 2014 as a 40-foot school bus outfitted with two exam rooms. It would park next to a partner agency, where patients could sit and wait before their appointments. The 2,200-square-foot clinic that opened last month replaces the bus and gives Americares more space to treat more patients – including five exam rooms.

Those who run free and charitable clinics are waiting “with bated breath” to see what direction federal health care policy takes, Lamoureux said.

The organization, which represents more than 600 of the country’s 1,200 free and charitable clinics, has its own pitch for Congress. Among other requests: If Medicaid is converted to a block-grant funding system, the association wants to ensure that free and charitable clinics are eligible to receive Medicaid funding. It wants to ensure that medications are affordable. The association also wants Congress to consider allowing a tax deduction for time medical professionals spend volunteering.