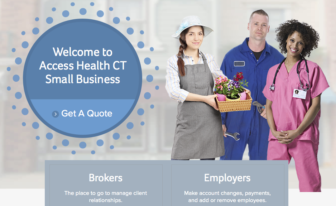 Washington – GOP plans to repeal the Affordable Care Act would affect individuals who’ve been purchasing their coverage on state exchanges or through the expansion of Medicaid the most, but some who receive their health care from their employers are also likely to be affected.

The ACA mandated that companies with 50 or more full-time equivalent employees provide health insurance to at least 95 percent of their full-time employees and dependents up to age 26, or pay a penalty.

A repeal of the mandate, a Republican priority, may prompt some of those companies to drop coverage.

Jonathan Shulman, president and CEO of Shulman Insurance, which has an office in West Hartford, said restaurants, home health care companies and retailers are the most likely to drop coverage.

“Companies that traditionally did not have health care benefits would be the most likely to stop them,” he said.

Most of Connecticut’s largest companies were covering their workers with health insurance before the ACA took effect, so a large-scale loss of employer coverage is not expected at those companies, some of which have workers protected by unions.

But the end of the ACA would allow those employers to look for less expensive, less comprehensive plans than were required by the health care law.

Under the Affordable Care Act, companies with fewer than 50 employees are not required to provide health benefits. But some are given an incentive to do so by the establishment of new tax breaks for companies who do provide coverage.

To qualify, small business owners must purchase insurance through the ACA’s “SHOP Marketplace” on state exchanges.

Access Health CT gives one example: a “Main Street Mechanic” shop with 10 employees and an annual payroll of $250,000 with health care costs totaling $70,000 a year would receive a 50 percent credit starting in 2014. That means the owner of that shop could take $35,000 off his or her tax bill.

William Malloy, an insurance broker in Stamford, said few small businesses in Connecticut have taken advantage of the tax credit. “It’s negligible,” he said of the number that have. “I never wrote any group coverage through the marketplace.”

Some small businesses did not know about the tax credit; others told Malloy it was too time consuming and difficult to calculate.

Also, the restrictions for the tax credit prevented some businesses from applying.
To qualify, a business must have an average pay of no more than $52,000 a year for each employee and no more than 25 full-time workers on the payroll.

“Most employees in Connecticut are paid more than that,” Herz said of the $52,000 salary limit. “Frankly I didn’t see many employers taking advantage of the tax break.”

John Carbone, the Connecticut “SHOP Marketplace” sales manager, said 230 businesses in the state have signed up for coverage through the program.

On “Small Business Saturday” last weekend, Access Health CT made a pitch for more customers, despite the uncertainty there is about the ACA’s future.

“While people are thinking about shopping at local stores, we want those small business owners to think about boosting their company by exploring their healthcare plan options through Access Health CT,” said CEO James Wadleigh. “It’s easy to use, and business owners can save money if they qualify for tax credits that are only offered through us.”

Carbone said he will continue to press businesses to sign up while the ACA is still in force.

“Until (there’s a repeal) we will be playing the game under the current rules,” he said.

Herz said the Connecticut business community is concerned about the future of the ACA since health care costs have a “big impact on the bottom line.”

“It’s a mixed bag,” she said of the health care law. “It had some good things and some frustrating things.”

Before the ACA Act, Connecticut already had mandated that businesses providing healthcare coverage for their workers provide a relatively generous basket of benefits. But Herz said the ACA brought about new “rating rules” that helped push up premiums, frustrating small businesses. Those rules included capping rates for older workers at no more than three times that of younger ones – before the ACA the ratio was 6 to 1 – and rating women the same as men.

On Tuesday, President-elect Donald Trump nominated Georgia Republican Rep. Tom Price, an orthopedic surgeon, to head the Department of Health and Human Services. Price is the main architect in the U.S. House of Representatives of the GOP plan to “repeal and replace” the ACA.

But how Congress will do that is still not clear.

“It’s just a big unknown at this point,” Herz said.