Here’s what we know about CT’s Obamacare insurance customers 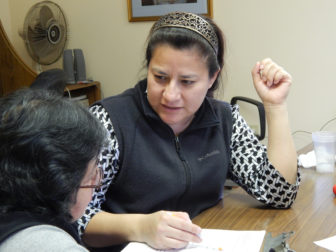 Volunteer Maria Hernandez helps a woman sign up for health care insurance during an event in Windham during the first open enrollment period in 2013.

In all, 111,542 Connecticut residents signed up for private insurance plans through the state’s health insurance exchange, Access Health CT.

That’s a 4 percent dip from last year. CEO Jim Wadleigh said Thursday that could reflect the fact that insurance companies stopped paying commissions to brokers for exchange plans – reducing the availability of help signing up for coverage – and confusion about changes to the Affordable Care Act at the federal level.

So who are the customers who bought plans through the exchange? Here’s what we know, based on data presented to the board Thursday.

The biggest chunk of customers were on the older end of the age spectrum: 31 percent were aged 55 to 64. Another 1.5 percent are 65 and older. (Most people in that age group instead pick Medicare, but people who don’t have enough work history to qualify for premium-free Medicare Part A might instead buy private insurance.) There are 363 enrollees older than 75.

As for the coveted “young invincibles” – younger people whose premiums are expected to help offset the costs of older members who require more medical services – those aged 19 to 25 make up 9 percent of customers, while 15 percent are aged 26 to 34.

Overall, more than three-quarters of exchange customers qualified for financial assistance to discount their premiums.

Just under 51 percent had incomes low enough to qualify for both discounted premiums and federal assistance to lower their copays and deductibles. (That’s available to people with incomes below 250 percent of the poverty level, or $61,500 for a family of four.)

Another 25.6 percent qualified for discounted premiums, which are available to people with household incomes below 400 percent of the poverty level ($98,400 for a family of four).

The other 23.6 percent will be paying full price for their coverage. That generally means they earn too much to qualify for discounts, although more than 10 percent of customers didn’t bother to go through the application section that would determine if they qualified for financial help.

A lot of customers live in Fairfield County

Access Health officials said it wasn’t clear why enrollment skewed more heavily there, although they noted that Hartford and New Haven were also among the top 10 places enrollees live.

State budget director Ben Barnes, a board member, offered one possible explanation for the Fairfield County dominance: Norwalk and Stamford, in particular, have significantly higher average incomes than other cities in the state, suggesting that more people there might be eligible for private insurance plans rather than Medicaid.

In addition, Stamford and Norwalk have many residents who are foreign-born, Barnes noted. Legal immigrants are not eligible for Medicaid unless they have been in the country for five years, but they can buy private insurance through the exchange.

Two-thirds of customers are white – but the data is incomplete

The exchange asks, but doesn’t require, applicants to report their race and ethnicity, and about 30 percent decline to do so. Among those who did, 67 percent said they are white. Sixteen percent are Hispanic, while 8 percent are black.

Nationally, the uninsured rate among Hispanics is far higher than among other groups.

According to 2015 Census figures, 81 percent of Connecticut residents were white, 11.6 percent were black, and 15.4 percent were Hispanic. (People can report being Hispanic as well as white, black or another race.)

For the third year in a row, ConnectiCare Benefits Inc. was the most popular insurance company on the exchange. This year, 69 percent of customers signed up for plans offered by the carrier.

Anthem Blue Cross and Blue Shield, the state’s largest insurance company, had the most sign-ups in 2014, the first year Access Health offered coverage.

Last year, 53 percent of those who signed up picked ConnectiCare, while 33 percent picked Anthem. Another 12 percent chose HealthyCT – a nonprofit insurer that has since gone out of business – and just under 2 percent picked UnitedHealthcare, which opted not to sell plans through the exchange this year.

Robert Blundo, Access Health’s director of technical operations and analytics, suggested that price could be a reason for ConnectiCare’s edge this year.

“In general, our customers are extremely price conscious, and ConnectiCare did have generally lower rates compared to Anthem for on-exchange products this year,” he said.