CT uninsured rate among lowest in the country, report says 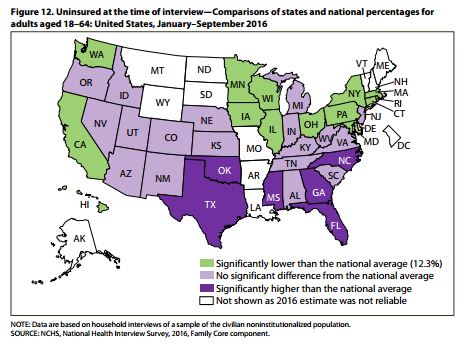 Connecticut had one of the lowest rates of uninsured residents in the country last year, according to estimates from a federal survey released this week.

The estimates from the National Health Interview Survey, released by the National Center for Health Statistics, pegged Connecticut’s uninsured rate at 3.5 percent – but the authors warned that that figure should be used with caution because the potential for error “does not meet standards of reliability or precision.”

There was more confidence in the estimate of Connecticut adults under 65 who lacked insurance at the time of the interview: 5.8 percent.

The report did not include the rate of uninsured children because the figure was not considered reliable.

The 2015 survey found an uninsured rate of 4.9 percent in Connecticut. Census figures for the same year estimated that the state’s uninsured rate at 6 percent.

In the estimates released this week, the uninsured rate by state ranged from 18 percent in Texas to 2.3 percent in Hawaii, although that state’s estimate came with the same caveat as Connecticut’s. Massachusetts – also subject to the same disclaimer – had a 3.1 percent uninsured rate, while Rhode Island’s was 3.6 percent. New York’s rate was 5.4 percent, while New Jersey’s was 8.2 percent. Those figures are for people of all ages, and were based on insurance status at the time of the interview.

Overall, the survey found, 8.8 percent of people in the U.S. were uninsured at the time of the interview, a 0.3 percent drop from 2015. 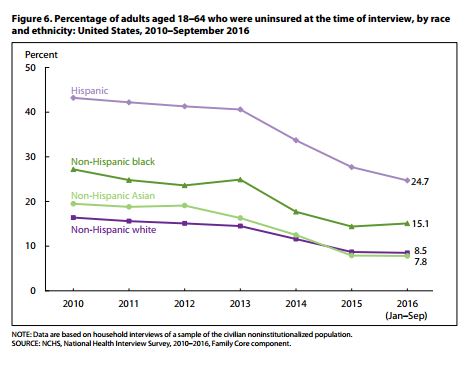 The uninsured rate by race and ethnicity.

The authors noted that from 1997 through 2013, the percentage of adults aged 18 to 64 who lacked health insurance at the time of the interview generally rose from year to year. By contrast, the uninsured rate among adults under 64 fell from 20.4 percent to 12.3 percent between 2013 and the first nine months of 2016. That reflects the period after the major coverage provisions of Obamacare took effect, including the availability of federal subsidies to discount insurance premiums for many who bought coverage on their own, and expanded Medicaid eligibility.

The survey also found continued growth in the use of high-deductible health plans; 39.1 percent of people under 65 were enrolled in one during the first nine months of 2016, compared to 25.3 percent in 2010. Fewer than half of those with high-deductible plans had health savings accounts, which allow people to save money for health care expenses on a tax-advantaged basis, although the use of those accounts has also grown, from 7.7 percent in 2010 to 15.2 percent in 2016.