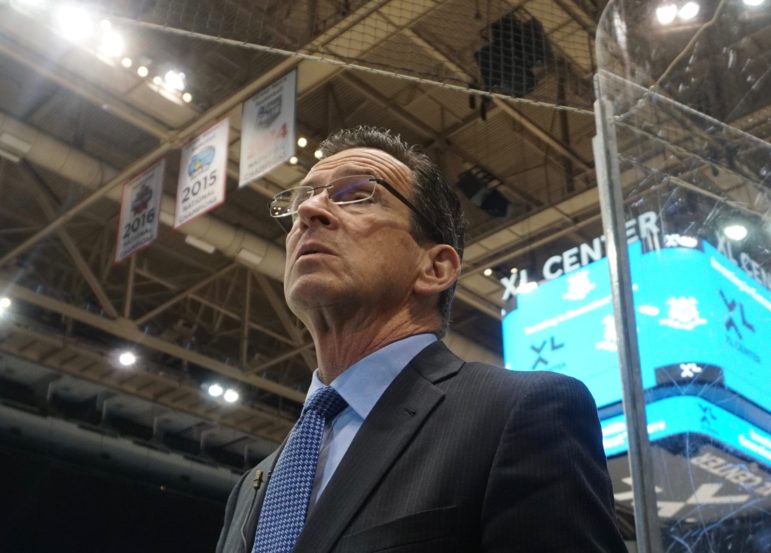 Gov. Dannel P. Malloy said Friday that a $250 million plan to overhaul the aging XL Center in downtown Hartford to keep University of Connecticut teams as tenants is a blueprint to modernize a 1970s arena that has reached the end of its useful life, not a long-shot bid to bring NHL hockey back to Connecticut.

“This is not a wing and a prayer with respect to NHL hockey,” Malloy said. “This is a long process, a thought-out process and one that we think leads to the logical conclusion that either we close this facility in the not-too-distant future, or we rebuild it. Because I’m certainly not going to propose that we spend $750 million to $1 billion on a new facility.”

Malloy said publicity about the invitation he and Hartford Mayor Luke Bronin extended to the New York Islanders to consider the XL Center, which he says they made after reading about the team’s interest in a new venue, has led to inquiries from an ownership group now trying to acquire an NHL franchise.

“As a result of sending that letter, getting as much publicity as it got, we have been contacted by a group that would very much like to explore” the state’s plans for modernizing the XL Center, Malloy said.

But Malloy said the NHL flirtation, while welcome and worth pursuing, has wrongly cast the years of planning and feasibility studies by the Capital Region Development Authority, which now runs the arena built by the city of Hartford, as driven by a courtship to bring an NHL team to the former home of the Hartford Whalers.

“A lot has been made, and I think has confused people that we need to spend money on this facility in the hope and prayer that we’ll get an NHL team,” Malloy said. 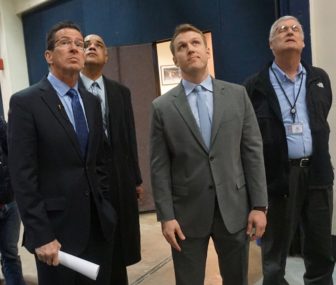 XL GM Chris Lawrence tells Malloy about a pipe that recently ruptured. At right is Robert Saint of the CRDA. Behind the governor is Rep. Angel Arce.

Arena executives took Malloy and reporters on a tour of the arena, pointing out a pipe that ruptured the previous night during a UConn basketball game, a freight elevator that broke four years ago, an unreliable air-conditioning system that keeps away summer concerts and a leaky refrigeration system that struggles to maintain ice for hockey.

The cost of replacement starts at $750 million, while a design firm hired by the Capital Regional Development Authority has prepared a $250 million plan that Malloy wants the state to fund that could transform the arena with new mechanical systems, larger concourses and modern amenities, including revenue-producing luxury boxes.

Malloy made news with a letter sent on impulse to the owners of the New York Islanders offering the XL Center as a home to an NHL franchise looking for an alternative to their temporary home at the Barclay’s Center in Brooklyn. Publicity over the letter has prompted an unnamed group trying to acquire an NHL franchise to inquire about the XL modernization plans.

The Whalers left Hartford in 1997.

Robert Saint, the authority’s director of construction services, and the XL’s general manager, Chris Lawrence, led the group into the mechanical areas of the arena. Saint carried a clipboard with schematics showing what the XL would look like after a four-year construction project arranged around the seasons of UConn hockey and basketball.

A modernized XL Center would have a better chance of being financially self-sustaining, Saint said.

The state completed nearly $35 million in upgrades in 2014 to extend the life of the building. In the meantime, the development authority produced a plan to modernize the building that relied on UConn as the building’s prime tenant, which would require a commitment of the school’s hockey and men’s and women’s basketball teams each to play 10 games in Hartford.

Further investments are being made on the assumption the building will be saved, including plans to rip up the floor this summer and install a new refrigeration system necessary to maintain a sheet of ice for hockey.

A freight elevator also is being installed.

But other amenities cannot be added unless the arena expands into retail and lobby space now controlled by Northland, which holds the lease on the commercial portion of a complex that includes the arena, exhibition space, a garage and an apartment tower.

“We have exactly half the number of toilets required by code,” Saint told Malloy.

Saint said the XL does have the space to expand restrooms, concessions and other modern amenities.