Trump, Malloy and PACs are factors in special elections today 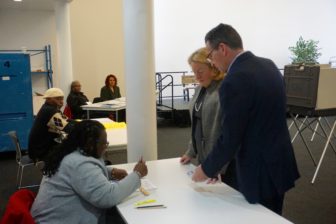 Gov. Dannel P. Malloy and his wife, Cathy, checking in to vote today in the 2nd Senate District, where Republicans have made him the issue.

Voters go to the polls today in special elections for three seats in the closely divided General Assembly, with one of the races drawing more than $50,000 in independent expenditures by a national group hoping to elect a Democratic senator in a solid Republican district.

Control of the evenly split Senate will be resolved in the 2nd and 32nd districts, the former a Democratic stronghold in greater Hartford and the latter a historically safe GOP seat outside Waterbury. The third race is in the 115th House District of West Haven.

On paper, neither Senate district is competitive, but Democrats and their allies are investing in a long-shot bid for the 32nd District seat in the hopes that an activist base energized by opposition to President Trump can produce an upset.

The National Rifle Association’s Victory Fund has spent $1,429 on direct mail in support of Berthel.

Both Cava and Berthel have qualified for public financing grants of $71,783, as have the major-party nominees in the 2nd Senatorial District: Rep. Douglas McCrory, D-Hartford, and Republican Michael W. McDonald of Windsor.

In the 115th House District, only the Democratic nominee, Dorinda Borer, has qualified for a public financing grant of $21,113. Republican Edward R. Granfield had privately raised $18,945 as of Feb. 19.

Daniel M. Lynch, a petitioning candidate, also is on the ballot in the 32nd District. Aaron Romano and Charles Jackson have registered as write-in candidates in the 2nd District.

The best hope for a GOP upset in the 2nd is a low-turnout of McCrory’s base in Hartford’s North End, as well as any lingering hard feelings in a contest for the nomination that pitted McCrory against Democrats from Windsor and Bloomfield.

McDonald has tried to make Gov. Dannel P. Malloy the central issue his campaign, while Cava’s supporters have tried to exploit opposition to Trump.

“I don’t think the outcome will be reflective of anything other than who did more work, quite frankly,” Malloy said after voting in Hartford with his wife, Cathy.

Voting two hours after the polls opened, the Malloys cast the 35th and 36th votes in their polling place at the Hartford Seminary in the city’s West End.

Secretary of the State Denise Merrill, who lives in the West End and votes in the same polling place as the governor, said special elections are notorious for their low turnouts. She expects nothing different today.

“Living in this neighborhood, I haven’t even heard any talk about the elections, so we’ll see what happens,” Merrill said.

“Special elections are about turnout and operations,” said J.R. Romano, the GOP state chairman. “Specials can be scary for both sides.” 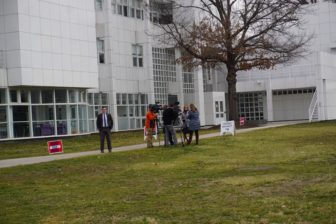 It was quiet outside this Hartford polling place, except for reporters talking to Secretary of the State Denise Merrill. She cast the 46th vote at 8:30 a.m.

The special elections come less than a month after Malloy, a Democrat, proposed closing a $1.7 billion budget shortfall with with spending cuts, labor concessions and shifting some teacher pension costs from the state to the cities, which could force property tax increases.

At the same time, activists have been packing public meetings called by members of the congressional delegation, registering their opposition to the first month of the Trump administration.

Romano said he believes Democrats will have difficulty redirecting anger toward Trump into state legislative races, while Republicans have an easier time connecting control of the state Senate to Malloy’s unpopular budget proposal.

“If we steal the 2nd, it’s because Mike McDonald presents an opportunity to stop Dan Malloy,” Romano said.

Michael Mandell, the executive director of the Connecticut Democratic Party, said the efforts on behalf of Cava in the 32nd are a good sign for the party, as is the perception by Grow CT that it needed to at least partially offset the spending by Wolf PAC.

“They won by 30 points. It’s a pretty big statement that they have to dump money from outside Connecticut in the district. It’s a statement about the energy at the grass roots level on the Democratic side,” Mandell said.

“My tendency is always to err on the side of caution,” she said.

Her spending has been on targeted mobile and web advertising to promote GOP turnout. In a report filed today, the PAC disclosed the expenditure of $3,000 for paid phone calls to turnout GOP voters.

Dargan quit to accept an appointment by Malloy to the Board of Pardons and Paroles.

Coleman and Kane resigned simultaneously minutes before the opening of the 2017 session to maintain the balance of power. Coleman is seeking an appointment to the bench, something not possible had he begun a new term; Kane quit knowing he would be named as the Republican state auditor.

The only outside spending reported in the 2nd District is $4,500 in support of McCrory by Build CT, a political action committee recently formed by Tim Hammill of Bridgeport, who was a communications staffer for the city’s former mayor, Bill Finch.

Organizational expenditures by the state parties and the legislative caucuses will not be reported until the next quarterly financial report.

Organized labor is another factor in the elections. The Working Families Party, which is funded by unions, has cross-endorsed Cava in the 32nd Senate District and Borer in the 115th House District. McCrory did not seek the party’s backing.

A spokesman for AFSCME, the major public-sector employees union, has written to its members in all three districts, urging a vote for the Democrats.

Polls are open from 6 a.m. to 8 p.m. Voters can find their polling places at myvote.ct.gov. There is no election day egistration for special elections.