Given the Trump Administration’s increased focus on deporting more undocumented immigrants, state legislators want to know just how many children they may end up leaving behind.

On Monday the Department of Children and Families reported to the Appropriations Committee that there are 22,000 children of undocumented immigrants who are under 18, U.S. citizens and living in Connecticut.

“We know we have many, many children who are here legally but whose families are not,” DCF Commissioner Joette Katz told legislators recently. “And if in fact their families are deported you will see a huge increase in the number of children who will have to come into DCF care and custody.” 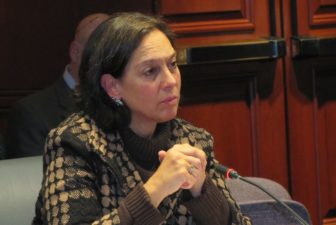 Gov. Dannel P. Malloy and State Education Commissioner Dianna Wentzell on Feb. 21 wrote school superintendents recommending they make plans in case federal immigration officials come to their schools and urging them to provide students and parents with information about their legal rights.

Teachers interviewed by the Mirror in recent weeks have said they have done their best to tell students they have their backs.

“We are their safe haven,” said Jessica Otero, a teacher of English language learners at Diloreto Elementary and Middle School in New Britain. “They are protected here.”

DCF worries President Trump’s recent actions will start increasing the number of children in their care.

“If their parents are deported, some or all of those children could enter the foster care system. We estimate this would have a significant fiscal impact on the department and on other state services,” the DCF wrote in materials submitted to the Appropriations Committee.

The state’s child welfare agency has experienced an influx of reports in recent years because of the opiod and drug epidemic in the state and because legislators increased who is now legally required to submit reports of abuse or neglect to the agency.