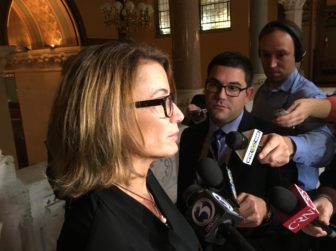 While Gov. Dannel P. Malloy and Senate Republican leader Len Fasano were swapping barbs recently about the next state budget, their public exchange ironically hinted at something just the opposite.

Namely, that the next state budget may be crafted behind closed doors to a much greater extent than in any other recent session.

While final budget negotiations between the legislature and governor take place in private, the starting positions of both sides are staked out publicly in advance.

But what happens if partisan gridlock prevents the legislature’s budget-writing panels from proposing a complete budget later this spring?

Leaders of the Democratic and Republican caucuses in the House and Senate all acknowledged that possibility last week. And while they remained hopeful, all conceded there has been no compromise to date.

“I wouldn’t like it. It’s not ideal,” said House Speaker Joe Aresimowicz, D-Berlin. “I am going in as optimistic as I can.”

“I am always optimistic until you prove me wrong,” House Minority Leader Themis Klarides, R-Derby, said. “But I am also prepared to be the one to take a stand.”

Both parties have been anticipating a more contentious — and complex — budget adoption process since the November elections. Republican gains turned a 21-15 Democratic advantage in the Senate into an 18-18 tie, and an 87-64 Democratic lead in the House into a slim 78-71 margin.

More important are the splits on the Appropriations Committee — which recommends the expenditure side of the state budget — and on the Finance, Revenue and Bonding Committee, which crafts the tax side of the legislature’s plan.

Each committee has six Democratic senators and six Republicans. And the Democratic margin among representatives is just one: 21-20 on Appropriations and 20-19 on Finance.

Procedurally, either party can split the committee, forcing senators and representatives to vote separately.

That means Democrats or Republicans can kill any Senate proposal with a tie vote. Democratic representatives could pass spending or tax proposals over GOP opposition — as long as not one Democratic House member defects.

That need for House Democratic unanimity could be a death sentence for anything too controversial. And with fiscal analysts projecting that finances — unless adjusted — will run $3 billion or more in the red over the next two fiscal years, the chance of avoiding controversial proposals is nil. 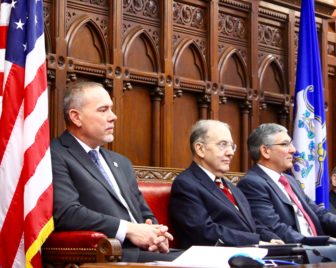 From left, House Speaker Joe Aresimowicz next to the Democratic and Republican leaders of the Senate, Martin Looney, center,  and Len Fasano.

That could be particularly challenging for the finance committee, where Democrats are weighing proposals to raise the sales and cigarette taxes and curb some income tax credits.

Republicans almost universally have said tax hikes are off the table — a stand that Democrats argue is fiscally dishonest absent a GOP blueprint to close the $3 billion in deficits with spending cuts alone.

Malloy, whose budget proposal was submitted — as required by law — in early February, challenged Fasano along those lines recently in an open letter.

The Democratic governor’s message: Stop complaining about his plan and instead share your own.

“Please let me know at your earliest convenience when your full, detailed budget will be shared,” Malloy wrote to Fasano. “I am eager to learn your ideas for reaching a balanced budget this year and look forward to your constructive partnership.”

“Thank you for your obviously politically charged and partisan letter today,” Fasano wrote in his response to Malloy.

Over the past decade, when Republicans held fewer seats in both chambers, they traditionally presented a minority alternative budget in April to coincide with the recommendations of the Democrat-controlled budget committees.

But Fasano said his caucus isn’t in the minority. No one would expect Democratic leaders to pre-empt the committee process and release a budget proposal now, so why should he do so?

“The Appropriations budget has always been viewed as a Democratic budget,” he told The Mirror. “And that may no longer be true.”

Fasano also said Republicans will show their budget ideas later this year, but how and when has yet to be determined.

Senate President Pro Tem Martin M. Looney, D-New Haven, said that while he “remains hopeful” that Democrats and Republicans will strike a bipartisan tone and compromise at the committee level, the early indications are not good.

“It seems that the Republican game plan has been to be in opposition as much as they can be,” Looney said, adding that the news media too often “has not recognized the political manipulation that it is.”

Will Democrats, already wary of GOP gains in the last election, even vote in committee for tax hikes with no guarantee the GOP will publicly offer an alternative?

Rep. Jason Rojas, D-East Hartford, House chair of the finance committee, acknowledged some revenue-raising ideas would have to be jettisoned this year if the partisan divide doesn’t break down.

If a tax plan has to be adopted in committee only by House Democrats, that’s a more diverse group than some realize, he said. There are progressives who want higher tax burdens on the wealthy, moderates who fear added taxes anywhere could stifle the business climate, and plenty of other views in the mix. 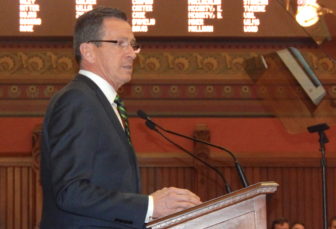 Gov. Dannel P. Malloy delivers his state of the state address as the 2017 legislative session opens.

“I would say I have cautious optimism we can get something done,” he said.

If the budget committees only adopt fragments of a plan — leaving the most controversial elements to be resolved in closed-door talks — it still would be an accomplishment given the political climate this year, Aresimowicz said.

But he added that if Republicans don’t participate — by withholding their ideas, their votes, or both — Democrats won’t overlook it.

“I’m going into this as optimistic as I can,” Aresimowicz said. “But we can’t make voting ‘no’ easy. … That’s just not realistic.”

Klarides said Democrats have rebuffed Republican proposals for years, noting that GOP calls for union concessions were ridiculed in recent years but are acceptable now that Malloy also has said he wants worker givebacks.

The committee process can work, she added. Democrats only need to revisit the budgets Republicans proposed over the last few years, and embrace those concepts.

“We have to change how the state of Connecticut operates going forward,” Klarides said. “‘Good enough’ isn’t good enough any more.”