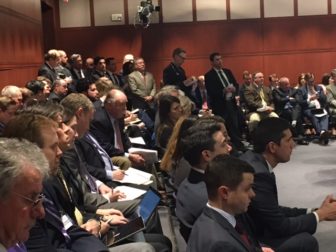 Lobbyists and others watch the Energy and Technology debate.

Lobbyists crowded into a committee room at the General Assembly to watch the inevitable advance Tuesday of a bill that sponsors say would simultaneously lower electric rates and stabilize profits generated by the Millstone Nuclear Power Station. Opponents say the bill would cost ratepayers and produce a windfall for the plant’s owner, Dominion Resources of Virginia.

The legislature’s Energy and Technology Committee voted 17-7 to send the bill to the Senate floor without the benefit of an independent analysis of how it would impact a state energy market that is often described as a hybrid — deregulated within certain broad parameters set by the state.

Standing cautiously between Dominion and a coalition opposing the bill was the state Department of Energy and Environmental Protection, which would be given authority to determine if Millstone would be allowed to sell up to half its power in a new market under long-term contracts. It would bid against power generated by biomass and trash-to-energy plants.

“We saw this latest version of the language an hour or two ago. We’re in discussion with the committee,” Rob Klee, the commissioner of DEEP. “We’ve raised some significant concerns, particularly on how to know when this authority should be exercised and under what conditions, what circumstances.”

To avoid the volatility of daily energy auctions, Dominion has long sold long-term energy contracts to hedge funds and other buyers, but competition from low natural gas prices has weakened that market. Dominion has been pressing for more than a year for a regulatory structure that would ease direct sales to electric companies in contracts of up to five years.

By eliminating the hedge funds as middlemen, Dominion is claiming that both its bottom line would improve and ratepayers would save money. Opponents, including environmentalists and the consumer group AARP, are skeptical and say Dominion should open its books to prove that Millstone needs a friendlier regulatory structure.

Approval by the committee was no surprise: The still-evolving legislation is a response to an alarm first raised last year about the economic viability of Millstone, whose two nuclear reactors produce about half Connecticut’s electricity and nearly all its carbon-free power.

But many legislators who voted for the bill said their vote was an acknowledgement it should get a continued examination by the full General Assembly, not an indication of how they would vote on final passage.

“We don’t have a lot of good choices. It’s sort of like the budget.” said Rep. Jonathan Steinberg, D-Westport. “Sometimes you have to take the leap of faith and help the chair get it out of committee.”

Rep. Lonnie Reed, D-Branford, co-chair of the committee, said in an interview the complexity and importance  of the legislation might prompt the committee to hold an additional public hearing, something not usually done once a bill is sent to the floor.

A similar bill won unanimous passage last year in the Senate, but never was debated in the House.

Rep. Craig Fishbein, R-Wallingford, who is just two months into his first term, said the legislature was confronted with setting energy policy for the next 20 years and assuring the continued operation of what is arguably the most important source of emissions-free electricity in New England.

“I keep hearing it’s too big to fail,” Fishbein said.

But he voted no, saying he preferred a more deliberate process with “more vetting.”

Another freshman, Rep. Holly Cheeseman, R-East Lyme, said Millstone’s importance was made clear on Aug. 11, 2016, when a lightning strike sent the plant off line on a brutally hot day of high energy demand. Compounding the problem, other generating units in the region also went down, all of which sent the nonprofit corporation that runs the New England grid scrambling for power on the high-priced spot market.

Dominion has neither threatened nor reassured Connecticut on the status of Millstone. Without providing details on Millstone’s finances, it points to nuclear plants in Vermont, New York, Massachusetts and elsewhere that have closed or are slated to close.

“This is happening all across the country, so the folks who continue to say Millstone will continue to operate indefinitely, that’s just not accurate,” said Daniel A. Weekley, vice president of corporate affairs for Dominion. “We are looking to sustain Millstone for as long as possible through good operations. We like long-term contracts. That is one of the things we’ve been saying in Connecticut for years.”

Millstone’s two remaining units — one was closed before Dominion bought the station in Waterford — are licensed until 2035 and 2045, but Weekley said economics, not license status, will determine how long Millstone stays open.

“We don’t have a specific retirement plan today, but I will tell you Dominion operates each individual asset based on its own merits,” he said.

John Erlingheuser, the state director of advocacy for AARP, said Dominion is playing brinksmanship, using closures in other states to create a false sense that Millstone is teetering.

“The nuclear plants that have closed are old and unsafe,” he said.

In New York, the state offered subsidies to keep open a nuclear plant in return for sharing finances. Erlingheuser said the Connecticut bill would be a de facto subsidy by another name, an assertion that Reed says is incorrect.

The bill would allow Dominion to compete in the longer-term market with biomass and trash-to-energy plants, but the Department of Energy and Environmental Protection, the Public Utilities Regulatory Authority, the Office of Consumer Counsel and the attorney general’s office would have to review the bids to ensure they were in the best interest of ratepayers.

Tom Swan of the Connecticut Citizen Action Group, which opposes the bill, said the bill would give Dominion an advantage by pitting its power against a class of renewables that generally are more expensive. It’s a competition Dominion cannot lose, he said.

Reed said that Connecticut needs to keep Millstone open while the renewable energy industry continues to grow. Without it, the state has no chance of meeting its goals for reducing carbon emissions.

“Nuclear, love it or hate it, it’s zero carbon,” she said.