Democrats back ban on ‘dark money’ in state campaigns 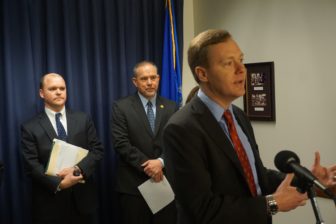 Grow Connecticut met the requirements of state campaign finance law by quickly disclosing the contribution from the Ohio group, A Public Voice, Inc. But who funded Public Voice? By funneling its spending through Grow Connecticut, it didn’t have to say.

With a bill that could test the limits of the states to regulate campaign finances, the House Democratic leadership is asking the General Assembly to effectively ban dark money from Connecticut elections — and change the rules for independent expenditures, a potential blow to the influence of Democratic and Republican governors associations here in 2018.

The Government Administration and Elections Committee voted 9-8 Monday night in the last scheduled meeting before its the deadline for acting on bills to endorse and send the Democratic legislation to the House floor. Every Republican was opposed.

“There should never be any question or doubt about exactly who is funding election campaigns,” Aresimowicz said.

House Minority Leader Themis Klarides, R-Derby, said the GOP wanted greater transparency in campaign finance, but Republicans are waiting to see if Democrats agree to close a loophole that allows legislators to maintain personal political action committees, even if they participate in the state’s voluntary system of public financing.

“There should be greater disclosure throughout the campaign finance system,’’ Klarides said. “But the funneling of money raised right here at home into targeted races that have already received maximum contributions under the law is an obvious attempt to get around the intent of the reforms.’’

Republicans have long complained that Democrats have sidestepped Connecticut’s public financing law, which imposes spending and contribution limits on participants, with expenditures made through the state and local party organizations.

The Democratic bill appeared to be largely designed in response to Grow Connecticut, which also spent money on targeted legislative races last year, when Republicans captured half the seats in the Senate and fell just four short of winning a majority in the House.

“It’s so funny they are scared of me, little old me,” said Liz Kurantowicz, the former Republican state official who runs Grow Connecticut. “I’m not surprised the Democrats would want to limit free speech in Connecticut.”

The Democratic bill would:

Paul Seamus Ryan, a national campaign-finance expert at Common Cause, called the legislation a “cutting-edge” approach whose disclosure provisions likely would survive a court challenge.

In a 5-4 decision, the U.S. Supreme Court ruled in Citizens United that corporations, unions and individuals could make unlimited expenditures in support of a candidate, so long as there was no coordination with the candidate’s campaign.

But Ryan said the court also invited state and federal laws enhancing transparency and, before the death of Antonin Scalia, had consistently voted 8-1 to uphold transparency provisions in challenged campaign finance laws. The only dissenter was Clarence Thomas.

“In doing so, they were saying, ‘Don’t worry, America, we’re unleashing a torrent of money, but there will be transparency,’ ” Ryan said.

On its face, the $70,000 aggregate limit on contributions to independent expenditure groups seems to run counter to the principles of Citizens United, which allow unlimited spending.

“This is going to be a heavier lift to defend constitutionally,” Ryan said.

But it could survive, Ryan said, if the court views the $70,000 limit as a means to bar individuals from evading disclosure, not from limiting spending. His rationale: Individuals or corporations still could make unlimited independent expenditures in Connecticut under the proposed law so long as they made them in their own name.

“It’s an important distinction,” Ryan said. “If this law passes and the state ends up in court, they could say, ‘This isn’t a contribution limit. This is intended to to stop the game of moving money around to avoid or evade the disclosure requirements.’ ”

But the DGA and RGA, who disclose the sources of their funds in public filings to the Internal Revenue Service, also would seem to be caught by the $70,000 aggregate limit as the legislation is now written. Some of their corporate donors give them hundreds of thousands of dollars in a calendar year.

Michael Brandi, executive director and general counsel of the State Elections Enforcement Commission, said the Democratic bill aims to strengthen disclosure laws and address the flow of outside spending on Connecticut races.

“We support these goals,” Brandi said. “The drafting process is a long one, and we look forward to continuing to work with the bill’s supporters to ensure that these goals can be effectively implemented and are not vulnerable to judicial challenge.”