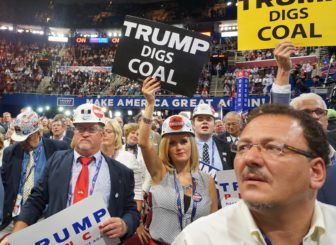 Behind Rep. Anthony D;Amelio of Waterbury, at right, is a West Virginia delegation happy to make coal jobs a GOP priority.

President Trump’s order rolling back many of his predecessor’s efforts to curb global warming was quickly denounced Tuesday in Connecticut, one of the northeastern states where successive Democratic and Republican gubernatorial administrations have supported policies to limit greenhouse gases.

Attorney General George Jepsen, a Democrat whose office made Connecticut one of 25 states to intervene in November 2015 in defense of President Obama’s federal Clean Power Plan, joined with Democratic colleagues in 15 other states in opposing Trump’s new executive order and warning of a potential legal challenge.

“Addressing our country’s largest source of carbon pollution — existing fossil fuel-burning power plants — is both required under the Clean Air Act and essential to mitigating climate change’s growing harm to our public health, environments, and economies,” they said in a joint statement. “We won’t hesitate to protect those we serve — including by aggressively opposing in court President Trump’s actions that ignore both the law and the critical importance of confronting the very real threat of climate change.”

The bipartisan support clean air policies have enjoyed in New England is reflected in the career path of Gina McCarthy, who was Obama’s administrator of the Environmental Protection Agency: She previously held top environmental jobs in the administration of two Republican governors, Mitt Romney of Massachusetts and M. Jodi Rell of Connecticut.

Trump signed the executive order at the headquarters of the EPA, calling it the start of “a new era” in energy production. It lifts a moratorium on new coal leases on federal lands and requires a review of the Clean Power Plan, a policy intended to restrict greenhouse gases from coal-fired power plants.

He acknowledged that Connecticut’s delegation, which was seated in front of West Virginia’s delegates at the Republican National Convention in Cleveland, was not among the constituencies to loudly cheer the GOP’s promises to bring back coal.

Power plant emissions are extremely low in the Northeast because of the replacement of most coal and oil-burning plants in the region with cleaner natural gas.

Connecticut was one of nine states that opened talks in 2003, when Republican John G. Rowland was governor, about a regional approach to restricting greenhouse gases. His successor, Rell, signed a compact in late 2005 committing the state to long-term goals for reducing carbon emissions.

The administration of Gov. Dannel P. Malloy, a Democrat, has supported the effort.

“The president’s latest executive order signifies a lack of leadership from Washington on climate change and is a dangerous detour from the progress our nation has made to protect the quality of the air we breathe and the health of the American public,” Malloy said Tuesday.

“It is hard to pick a more inauspicious moment to beat a retreat on climate change, when temperatures on our planet have now surpassed the previous record high three years in a row and when weather patterns of severe storms and drought are more erratic than ever,” said Robert Klee, the commissioner of the state Department of Energy and Environmental Protection.

The Connecticut Fund for the Environment called on the states to press for policies that would preserve the substance of the Clean Power Plan, which it said the EPA had projected would prevent 3,600 premature deaths and 90,000 asthma attacks annually.

“If the national Clean Power Plan is killed, that means cancer-causing and asthma-causing chemicals from Midwest power plants will continue to reach the lungs of our kids, hundreds of miles away,” said Donald S. Strait, president of the environmental group. “As long as this administration continues to take a chainsaw to environmental protections, it will be up to states to maintain momentum.”

Sen. Craig Miner, R-Litchfield, a co-chair of the Environment Committee declined comment, saying he needed to review Trump’s order and its impact on Connecticut.

Sen. Heather Somers, R-Groton, his vice chair, said she, too, was reviewing the order, “but at first glance it doesn’t look very encouraging.”

The reaction was universally critical from the state’s all-Democratic congressional delegation.

U.S. Sen. Chris Murphy, D-Conn., who co-sponsored a bill to fight climate change in 2015 with a Republican, U.S. Sen. Susan Collins of Maine, said Trump and many other Republicans ignore the dangers posed by greenhouse gases.

“The Republican party is going to extraordinary lengths to deny that this meteor that is global warming is careening toward us,” Murphy said. “My kids won’t be able to solve this problem if we don’t tackle it right now, because in 20 years it will be too late.”

U.S. Elizabeth Esty, D-5th District, whose husband, Dan Esty, is a Yale environmental lawyer and was Klee’s predecessor as the state environmental protection commissioner, said Trump’s order was anti-science and would not play well in Connecticut.

“At my recent community meetings in Waterbury and Goshen, my constituents told me in no uncertain terms that in spite of the President’s actions, they wanted Congress to stand up for science, for our environment, and for sustainable energy,” Esty said. “That’s exactly what I intend to do.”