Connecticut’s hospitals intensified their push Wednesday to block hundreds of millions of dollars in tax increases recommended for their industry by Gov. Dannel P. Malloy.

But the administration fired back that hospital executives are exaggerating the burdens they face while ignoring the benefits Connecticut’s poorest communities would reap from the governor’s plan. 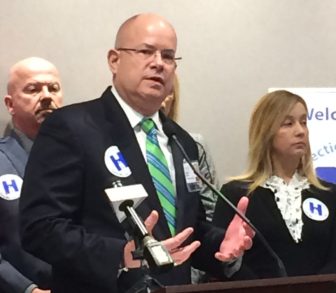 “It’s not like we are making money hand over fist,” Bristol Hospital President Kurt Barwis said during a mid-morning press conference in the Legislative Office Building, adding that his hospital lost $1.8 million last year. “There’s no question we lose money. We continue to lose money. It has to stop.”

Industry officials focused chiefly on two taxes on hospitals: an existing state levy and a proposed increase at the municipal level.

State government began levying a tax on hospitals in the 2011-12 fiscal year — originally using it as a legal mechanism to qualify for more federal funding.

The industry paid roughly $350 million into the state, which then returned $400 million in payments back to hospitals. But by making those payments, Connecticut then qualified for $200 million in federal Medicaid payments.

This arrangement, known as a provider tax, is employed in nearly all states.

But as Connecticut’s recovery from the last recession lagged, and as state budget deficits have lingered, the Malloy administration and the legislature gradually revised the hospital tax.

This year the industry will pay an estimated $556 million into the state, and receive just $118 million back. By not returning the full $556 million, Connecticut also is forfeiting hundreds of millions of dollars in potential federal Medicaid payments.

And the Connecticut Hospital Association charged in late February that Malloy’s new budget proposal for the next two fiscal years would increase that annual tax burden by just under $70 million — a claim the administration rejects.

At issue is the formula the state uses to calculate each hospital’s tax obligation.

The formula, which is based largely on hospital revenues, originally used 2009 receipts. Two years ago Malloy and legislators switched to 2013 receipts.

A new bill introduced in February on the governor’s behalf would update the revenue base every three months to reflect the latest revenues.

Chris McClure, spokesman for the governor’s budget office, said the administration stands by its projections, which show no state tax increase on hospitals over the next two fiscal years.

This would cost the industry an extra $212 million per year.

The governor says his plan would more than offset that property tax burden. He would boost annual payments to all hospitals by a total of $250 million per year while eliminating an $11.8 million grant program for small hospitals.

This would trigger about $167 million in additional Medicaid payments to state government.

But hospital association CEO Jennifer Jackson said the prospect of more federal dollars flowing into Connecticut is far from certain amid speculation that President Trump and the Republican-controlled Congress would look to reduce the Medicaid program.

Jackson also said state government has a poor track record when it comes to keeping its tax promises to the hospital industry.

But McClure said hospitals are not the only ones being asked to sacrifice as Connecticut grapples with surging public-sector retirement benefit costs tied to nearly eight decades of inadequate savings.

“The hospitals would have you believe they alone are shouldering a tremendous burden on behalf of the state’s residents in order to address the state’s fiscal difficulties, and are subject to taxes so onerous that they can barely stay in business,” McClure said. “ … Even after these taxes, hospitals reported FY 2016 revenues over expenses over $870 million — more than double the amount recorded for FY 2015.  Moreover, all Connecticut hospitals continue to accept Medicaid patients, and access to care remains a great strength of Connecticut’s Medicaid program.”

McClure added that, “Hospitals are worried about the future —as we should all be given the determination of the federal government to roll back our gains in insurance coverage – but under the two-year budget proposed by the governor, the industry would be better off than they are today. We should take the CHA’s statements for what they are – normal exaggeration before the legislature by a group looking for more public money.”

But Jackson said hospitals aren’t the only ones worried about the administration’s proposals for the industry.

Mayors and other leaders don’t want to levy property taxes on an industry that already has lost about 3,000 jobs since 2011, she said.

“I certainly doubt they wish to impose that tax,” she said.

And John Murphy, president of the Wester Connecticut Health Network of hospitals, said people are worried about hospitals shedding more than just jobs.

Hospitals’ ability to provide new services, and to recruit and retain top talent, also are being undermined, ultimately harming patients, he said.

“Unfortunately it is the weakest and the poorest among us who are harmed the most,” Murphy said.