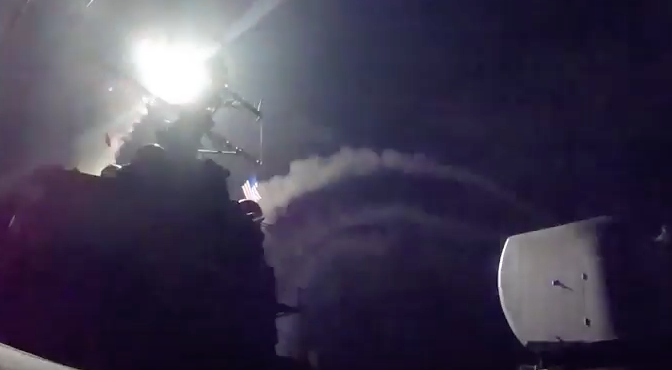 Washington – As they did when President Obama took action against ISIS in Syria, Connecticut’s Democratic lawmakers are calling for President Donald Trump to seek congressional approval before taking any further military action against Syrian strongman Bashar al-Assad.

But Congress did not take action when Obama began a U.S. military campaign in Syria — and isn’t likely to take action now — on legislation that would both authorize the use of military force (AUMF) and place limits on what that action could be.

The reason: Lawmakers have been hesitant to “own” a war and would rather the responsibility – and any blame – fall on the White House.

“Members of the opposing party may use the call for a new AUMF as a means to criticize the sitting president,” said Jim Twombly, a professor of American politics and the presidency at New York’s Elmira College. “It is often difficult, however, to get one to a vote or to vote for it because of the various political forces pulling on individual members of Congress.”

Twombly said depending on the wording of the measure – how much authority it cedes to the president, for example – and which party a lawmaker belongs to, a vote on an AUMF could cause a member to have a tough re-election.

Obama asked Congress for a new Authorization for Use of Military Force for his Syria campaign. But the former president maintained he already had authority for new military action from a 2001 AUMF approved overwhelmingly by Congress after the 9/11 attacks to take military action against Al Qaeda and its allies. Many lawmakers disagreed.

Sen. Chris Murphy was among several lawmakers to comply with Obama’s request for a new AUMF.  He sponsored a bill that would limit the president’s authority to make war by terminating in three years the authority Congress gave the White House after the  9/11 attacks.

But none of the legislation was approved by Congress.

Trump has not asked Congress for an AUMF, but in a briefing to members of Congress Friday afternoon Gen. Joseph Dunford, the chairman of the Joint Chiefs of Staff and other Pentagon officials promised to deliver a clear strategy and the goals the administration has in Syria.

Murphy and other Connecticut lawmakers say that like Obama, Trump needs an AUMF.

“Just because it’s hard to pass an AUMF in Congress doesn’t mean Trump has met the constitutional requirement, “ Murphy said .

Murphy, a member of the Senate Foreign Relations Committee, said Trump has been “quietly ramping up (U.S.)  troop deployment,” and that the airstrike has put the 500 or so American troops in Syria in greater peril.

Trump ordered the airstrike on a Syrian airbase on Thursday night after a chemical strike, possibly using Sarin gas, killed dozens of people in a rebel-held area in Syria.

Trump accused Assad of “choking out the lives of helpless men, women and children.”

“No child of God should ever suffer such horror,” he said.

The situation is Syria is complicated. Helped by Russia, Assad is fighting both rebels and ISIS militants. The United States is helping the rebels and fighting ISIS, but until now, stayed clear of trying to destabilize Assad.

Connecticut lawmakers were unanimous in their belief the attack was a “proportionate” response to the chemical attack.

“Last night’s missile strikes were a proportionate response to the Assad regime’s brutal use of chemical weapons against innocent civilians. They will lessen the ability of the Syrian military to continue its crimes and send a message that there will be consequences for those who violate the laws of war,” said Rep. Jim Himes, D-4th District, a member of the House Intelligence Committee.

There was also agreement among the Connecticut lawmakers that continued military engagement in Syria requires congressional approval.

“Congress has abdicated this responsibility for far too long. We can’t pour resources and risk the lives of our troops in a new military conflict without a clear, comprehensive strategy and full consideration of the long-term ramifications,” said Rep. Elizabeth Esty, D-5th District.

Rep. John Larson, D-1st District, said that even if lawmakers have to return to Washington from their two-week Easter recess, “Congress should take up an authorization of use of military force and debate on a long-term plan and a scope of authorities it would take to stop further atrocities, instead of simply yielding this congressional duty to the Executive Branch.”

“Congress is being negligent in its constitutional obligation,” Larson said.

“Further engagement in this conflict risks escalation that has the potential to carry serious consequences for the United States, including direct confrontation with Syria’s backers in Russia, which is why we need a comprehensive diplomatic approach to addressing the crisis in Syria,” said Rep. Joe Courtney, D-2nd District, a member of the House Armed Services Committee.

And many Democrats said there’s a disconnect between Trump’s concerns for civilian casualties in the conflict in Syria and his attempts to stem the flow of Syrian refugees into the United States.

“As a moral and humanitarian matter, providing refuge to Syrian victims of Assad’s atrocities is now more urgent than ever,” said Rep. Richard Blumenthal, a member of the  Senate Armed Services Committee.

Blumenthal also said stronger sanctions must be imposed on Russia and Iran — the Syrian government’s “abettors,” and Assad should be prosecuted for war crimes.

Esty said “a comprehensive strategy should account for diplomatic avenues, a plan for dealing with Russia’s support of Assad, and a thoughtful refugee policy to alleviate the terrible humanitarian crisis created by the ongoing violence.”