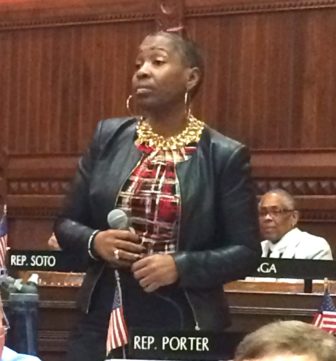 A measure to promote pay equity among men and women advanced Wednesday in the House of Representatives — but minus a key provision regarding inquiries into a prospective employee’s salary history.

The bill, which the House passed 139-9 and now heads to the Senate, would:

The bill strengthens gender pay equity legislation on the books since 1963, and puts added pressure on a wage gap that costs Connecticut women an estimated $5.5 billion per year, said Rep. Robyn Porter, D-New Haven, House chair of the labor committee.

Median annual pay for women employed full-time in Connecticut is $50,706, while it stands at $61,385 for men, according to the National Partnership for Women and Families.

And African-American women in Connecticut earn 59 cents for every $1 paid to men, while Latinas earn 48 cents per $1, she said.

“It really does deserve our attention,” Porter said, adding that despite the presence of anti-discrimination statutes since 1963, “We still haven’t made a halfway dent in this issue.”

Rep. Derek Slap, D-West Hartford, said the bill not only promotes fairness, but “it’s good for families, and it’s good for the economy.”

Citing pay equity legislation enacted recently in Massachusetts, Slap said the Bay State’s business community supported the measure as a means to attract skilled workers to the state, especially “millennials who really value the economy and want to know they are going to be treated fairly no matter what their gender is.”

But some critics questioned what the measure really would accomplish.

“I’m trying to figure out and get my head around why this bill is needed,” said Rep. Charles Ferraro, R-West Haven.

Porter said the bill expands the Department of Labor’s authority to apply the “comparable” standard to more types of occupations.

Still, one key provision of the bill, as it originally was approved by the Labor and Public Employees Committee, would have banned employers from asking a prospective employee about wage history.

“It’s a provision that a lot of the members of our caucus wanted to see remain in the bill,” said House Speaker Joe Aresimowicz, D-Berlin.

But the speaker added he believes strong Republican opposition to that language would have put the overall bill at risk.