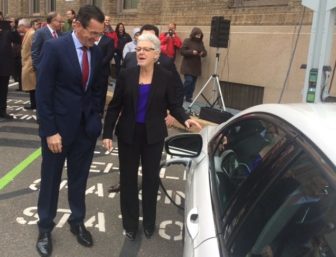 Gov. Dannel P. Malloy engaged in some high-level recycling Monday, bringing back Gina McCarthy to serve on the Board of Directors of the Connecticut Green Bank.

McCarthy was the commissioner of environmental protection in Connecticut under Malloy’s predecessor, Gov. M. Jodi Rell, before going to Washington to serve as the administrator of the Environmental Protection Agency under President Obama. She also was an environmental official in Massachusetts under Gov. Mitt Romney.

“I look forward to reuniting with my colleagues in Connecticut and representing Gov. Malloy on the Board of Directors of the Connecticut Green Bank,” McCarthy said. “There is no greater imperative at this time than mobilizing more private investment in clean energy deployment in communities throughout Connecticut and across this country to combat global climate change. I am discovering that there is a need and urgency for more green banks in cities, counties, and states across the nation.”

The Green Bank is a quasi-public authority with the mission of promoting clean energy technology by using public dollars to attract private investment in clean energy products.

“Gina McCarthy will be a fantastic advocate for advancing these causes,” Malloy said. “She has dedicated her career towards advocating for the very issues that the Connecticut Green Bank seeks to accomplish, and we are thrilled to have her expertise back in Connecticut serving the people of our state.”