The legislature’s tax-writing panel is considering a measure that would repeal the sales tax exemption on goods and services sold to nonprofits — a provision that saves these entities more than $200 million per year.

Democratic leaders of the Finance, Revenue and Bonding Committee said this proposal, which will go to a public hearing next week, is part of an ongoing exploration of possible widening of Connecticut’s sales tax base.

But the top House Republican on the committee and the state’s largest nonprofit association cautioned it could harm the nonprofit community at a time when Connecticut relies on it the most. 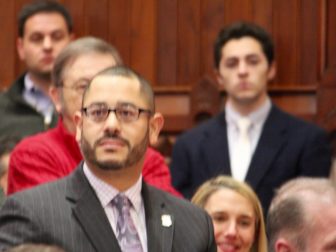 “At this point we are just hearing it,” Rep. Jason Rojas, D-East Hartford, House chair of the Finance committee said. “I think we have to take all (revenue) options seriously.”

The General Assembly and Gov. Dannel P. Malloy are trying to close major projected deficits in the next two-year state budget — a problem driven in part by surging retirement benefit costs tied to more than seven decades of inadequate funding.

State finances, unless adjusted, will run $1.4 billion in deficit next fiscal year, and $1.6 billion in the red in 2018-19, according to the legislature’s nonpartisan Office of Fiscal Analysis.

The Malloy administration pegs the shortfall at slightly more, forecasting potential deficits of $1.7 billion next fiscal year and $1.9 billion the year after that.

According to nonpartisan analysts, the sales tax exemption saves nonprofits about $216.2 million per year. Analysts also project that if the exemption were repealed, the state would see an annual revenue gain of $203.3 million.

Both Rojas and Sen. John Fonfara of Hartford — the Senate Democratic chair — said that while the tax panel’s deadline for approving bills is April 28, no consensus on whether to repeal the exemption for nonprofits has been established.

“We have not tested it or vote-counted it or anything like that,” Rojas said.

The two Democratic leaders said early in the 2017 legislative session that they would explore options to bolster sales tax receipts, including both broadening the base and increasing the 6.35 percent tax rate to help close the projected budget deficit.

The sales tax has been the second-largest source of revenue for the budget since 1991, when it relinquished its status as the top revenue engine to the new state income tax.

Though less volatile than the income levy, the sales tax is expected to face a slight hit in the next few fiscal years as Connecticut’s economic recovery lags the nation’s.

Sales tax receipts, which are expected to total nearly $4.25 billion this fiscal year, are projected to drop to about $3.9 billion next fiscal year and rebound partially to $4 billion by 2018-19, according to analysts for the legislature and for the Malloy administration.

Fonfara and Rojas both said a sales tax increase would be less harmful to the economy than boosting state income tax rates.

Malloy has said on several occasions that efforts to close the projected deficits in the next two-year budget should rely more on spending cuts than tax increases.

But one of the governor’s revenue proposals — requiring communities to pay one-third of the annual contribution to the teachers’ pension fund — has garnered significant criticism from lawmakers of both parties.

Some Democratic legislators have said these pension bills, which would total $408 million next fiscal year and $421 million in 2018-19, could be reduced or eliminated if sales tax receipts are increased. 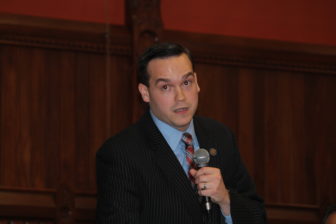 Rep. Chris Davis of Ellington, ranking GOP representative on the finance committee, argued such an increase might be counter-productive, noting that as state government continues to scale back social service programs to close budget deficits, it increases its reliance on community-based nonprofit social services.

“To add an additional tax burden onto these groups, that are doing the bulk of the (social services) work in our communities, might be the wrong direction,” Davis said.

“After a decade of budget cuts with more pending, Connecticut’s nonprofits are alarmed that lawmakers are considering a sales tax change that in the first year alone would take $200 million away from services provided by organizations like homeless shelters and food pantries,” Executive Director Gian-Carl Casa said. “Nonprofits have long been exempted from sales tax here and across the country for good reason: They provide services in their communities that government cannot. Eliminating that exemption would divert funds from programs for individuals with developmental disabilities, people struggling with substance abuse, victims of domestic violence, and arts and cultural programs, to name just a few.”

The Connecticut Conference of Municipalities proposed raising the rate to 7 percent and broadening the range of goods and services subject to the tax to raise about $700 million annually.

And Connecticut Voices for Children, a New Haven-based progressive policy group included a sales tax hike on a list of revenue-raising options to protect health care, education and social services.

Connecticut Voices estimated $1.5 billion extra could be raised annually by applying the tax to a much broader range of items. Lawmakers also could expand the base and reduce the sales tax rate from 6.35 percent to 5.5 percent and still boost sales tax receipts by $730 million per year, the group said.