Up for re-election, Murphy says he’s focused on activism, not campaigning

Sen. Chris Murphy argues against repeal of the Affordable Care Act on the Senate floor.

Washington – Despite the advantage President Donald Trump’s political gaffes may give them, many Senate Democrats face tough re-elections next year. But Chris Murphy isn’t one of them.

His campaign is raising millions of dollars, money it’s already using to hire staff. But the senator, who is defending what is considered a safe seat, says he won’t begin running for re-election in earnest until next year. No Republican has announced a challenge to the freshman senator yet, although Connecticut Republican Party chief J.R. Romano says a couple are interested.

“My focus right now is on grass-roots activism,” Murphy said. “I’m raising money but the campaign won’t begin for another year.”

Instead of taking to the stump, Murphy is using his campaign cash to fund the “Fight Back Connecticut” initiative, which aims to organize – and tap into – the anti-Trump movement that has taken root in Connecticut and across the nation since the president was elected.

That rebellion, led by progressives, has manifested itself in town halls held by Republican lawmakers across the nation.

“We’ve already seen the power of grass-roots activism in the Trump health care repeal,” Murphy said, referring to the failed effort to pass a health care bill to replace the Affordable Care Act.

He hopes the “grass-roots tempest” also has an effect on Trump’s immigration and climate change policies and a proposed budget that would slash domestic spending.

But there have been no angry congressional town halls in Connecticut, which has an all-Democratic congressional delegation. So how is the state going to push back against Trump’s agenda?

“There’s always a problem of progressive activism preaching to the choir in Connecticut,” Murphy conceded.

He pointed out, however, that his town hall on health care drew more than 2,000 people, “and that made news not only across Connecticut but across the country.” And there’s always the value in  Connecticut voices joining the national resistance movement against Trump.

Murphy, 43, has made national news many times since he was elected to the Senate in 2012, defeating wrestling entrepreneur Linda McMahon, whom Trump selected to head the Small Business Administration.

Sworn into office shortly after the Newtown massacre, Murphy took a leading role in a push for gun control. He made headlines last year with a 15-hour filibuster several days after the Pulse nightclub shooting in Orlando to press GOP leaders to allow votes on gun control bills. The filibuster, joined by nearly every Senate Democrat, yielded a promise from Senate Republicans to put gun bills up for a vote. They were defeated. 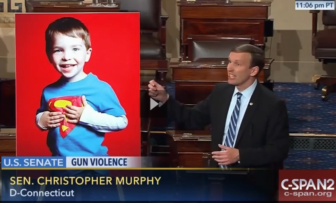 Sen. Chris Murphy displays a poster of Newtown shooting victim Dylan Hockley as he comes to the end of his filibuster over gun control on the Senate floor last June.

With the help of his adroit use of Twitter, Murphy’s walk across Connecticut last summer also drew attention. As did the hacking of Democratic National Committee emails that showed he had been on a list – a rather long list – of possible running mates for Hillary Clinton.

Although he had little seniority in the chamber, Democratic Senate leaders gave Murphy the nod when he volunteered to be the main defender of the Affordable Care Act in the Senate.

More recently, Murphy’s pushback on Trump’s foreign policy is making news. A member of the Senate Foreign Relations Committee, Murphy recently released “Rethinking the Battlefield,” his plan to promote diplomacy as an alternative to war  that calls for a sharp increase in spending on the State Department. Trump proposes to slash the budget for diplomacy and foreign aid.

“Trump’s foreign policy is becoming more militaristic every day,” Murphy said. “I worry the American president we have doesn’t have the tools right now to protect us from an attack.”

To Murphy those tools include diplomacy.

Art Paulson, professor emeritus of political science at Southern Connecticut State University, said “whispers have been growing” about Murphy’s national ambitions, but that’s the course many U.S. senators take. But Murphy may be in the right place at the right time, Paulson said.

“The Democratic national leadership is so bereft right now, there seems to be a hunger for new leadership,” Paulson said.

Murphy also has had legislative success in his freshman term in the Senate, teaming up with a Republican colleague to pass the first comprehensive mental health reform bill in decades.

He’s also initiated a “Buy American” campaign to press federal agencies for better compliance with laws that require the purchase of domestic goods and raw materials and champions a Connecticut business every week as part of his effort to boost manufacturing.

Not shying away from a fight

Murphy said his success in raising money has to do with his role in opposing most Trump policies. 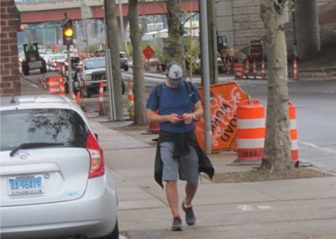 Murphy in New Haven during his walk across Connecticut last summer.

“I think people want to be activated. They want to help fight back, and one way they can do that is by helping those who are leading the fight,” Murphy said. “I haven’t shied away from the fight since the beginning of the Trump administration.”

Based on what he’s seen posted on the Democratic candidate’s social media accounts, Carter said he’s concerned the initiative would use  federal political contributions to bolster state and local candidates, in violation of state law.

He said the state Democratic Party was fined for using money in its federal fundraising account to pay for a pair of mailers that benefited the re-election of Governor Malloy in 2014 and Murphy might do the same.

But Murphy’s campaign says the money is going exclusively to grass-roots organizing.

Carter said he took some time off from politics after his defeat in November. But he hasn’t ruled out challenging Murphy.

Democrats must defend 23 Senate seats next year, and Republicans only nine. Despite Trump’s dampening of enthusiasm in some GOP quarters, four of those Democratic races are rated “toss-ups” by the nonpartisan Rothenberg & Gonzales Political Report. Another five Democratic Senate races are considered competitive, according to the political report.

Only one Republican race is considered competitive.

In a tough year for Democrats, however, Murphy’s seat is rated “safe Democrat.”

Paulson said the senator “is a heavy favorite” to keep his seat.

“Republicans have a bench, but few (potential candidates) have statewide name recognition,” Schurin said. “If they do, they want to run for governor.”

Malloy’s decision to refrain from seeking a third term as governor has left an open seat and wide interest in the race, which is expected to be very competitive.

Paulson agrees that Republican candidates will prefer running for an open governor’s seat over challenging Murphy.

He also said the hot governor’s race is likely to “overshadow” the Senate contest next year.

But Murphy’s willingness to clash with the Trump administration, and the youthful energy he displayed by standing 15 hours during his filibuster and by trekking across the state, is likely to keep him out of those shadows.

He maintains a home in Cheshire, but moved his family to Washington because he said he wanted to spend more time with his two young sons.