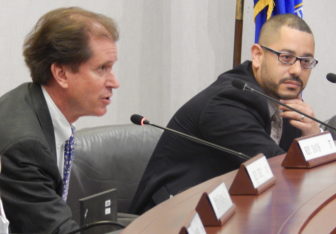 When legislative leaders disclosed Tuesday afternoon that the Finance, Revenue and Bonding Committee wouldn’t recommend any major tax hikes this year, that same panel already was more than three hours into a public hearing on proposals to do just that.

It is difficult to rule out tax hikes when the potential hole in the next fiscal year is about to top $2 billion, or more than 10 percent of the General Fund.

But with Democrats deadlocked 18-18 with Republicans in the Senate, and holding a slim 78-71 edge over the GOP in the House, neither side is eager to support the unpopular choices that may be needed to balance the books.

Meanwhile, state income tax receipts continued to erode Tuesday, falling $290 million or 20 percent below the level anticipated in the current budget for the month of April.

That trend threatens to significantly expand major deficits already forecast for the next two fiscal years. Gov. Dannel P. Malloy’s administration has warned since February that finances, unless adjusted, would run $1.7 billion in deficit next fiscal year and $1.9 billion in 2018-19.

And as the numbers slipped, business and labor leaders sparred over the pros and cons of tax hikes.

Other special interest groups explained how various budget options would harm them disproportionately.

And public officials dominated the early hours of the hearing — which began at 11:30 a.m. and dragged on into the evening — testifying before and debating with members of the finance committee.

House Minority Leader Themis Klarides, R-Derby, chastised the panel for considering ending the sales tax exemption on sales to nonprofits, which would cost such entities a projected $200 million per year.

As state government reduces reliance on public-sector employees, it relies increasingly on less expensive nonprofit groups to deliver social services “who do the job better and more efectively,” she said. “We put more burden on them and now we’re taxing them? … This may be on one of the saddest things I’ve seen in this building in 18 years.”

The executive director of the coalition representing Connecticut’s 21 YMCA’s, John Cattelan, said repealing that sales tax exemption on nonprofits “would end our existence as a nonprofit organization.”

But the House Democratic chair on finance, Rep. Jason Rojas of East Hartford, responded that municipal leaders have been complaining for years to legislators that nonprofits — many of which are exempt from local property taxes — pose an increasing fiscal challenge, particularly in the cities where they are plentiful.

“This conversation is really about trying to strike some type of balance,” Rojas told Klarides. “This was about engaging in a conversation. This was not about punishing nonprofits.”

Perhaps the most controversial measure discussed at Tuesday’s hearing involves raising the top marginal rate on the state income tax from 6.99 to 7.49 percent. It would apply to households earning more than $500,000 per year.

“Increasing the income tax rate will only serve to drive wealth and businesses out of our state,” testified Connecticut Business and Industry Association President Joseph F. Brennan. “Raising taxes will not generate the revenues advocates of increasing taxes are unwisely claiming will solve Connecticut’s budget situation.

The top earners this legislation targets are the ones who are most readily available to move out of state, and it is happening,” Brennan said.

But one of the state employee union leaders, CSEA SEIU Local 2001 President Stephen Anderson, noted there are other things to compare against neighboring states besides tax rates.

Supporting higher tax rates on the wealthy, Anderson argued, would help preserve the most vital programs and services that make Connecticut attractive.

“Connecticut does not exist in isolation,” he testified, adding that New York offers free state college tuition for middle-income residents. “We should not create a situation where Connecticut’s continuing austerity forces our residents to flee to neighboring states because we are unable to offer good-paying jobs or comparable state services.”

Hartford City Councilor Cynthia Jennings said that those who argue tax hikes are threatening Connecticut need to look at the capital city, which is struggling with deep poverty and fiscal insolvency.

The city not only has Connecticut’s highest commercial property tax rate — at 74.29 mills or $74.29 for every $1,000 of assessed property value — but 51 percent of its property value is exempt from taxation. That includes hospitals, universities, an airport, a trash-to-energy plant, and numerous state offices and facilities.

The city’s median income is about $29,000 per year, and 46 percent of Hartford children live in households with incomes under the federal poverty line. The city also has one of the highest unemployment rates in Connecticut.

“That is unconscionable given the state of poverty that the residents of Hartford live in,” Jennings said.