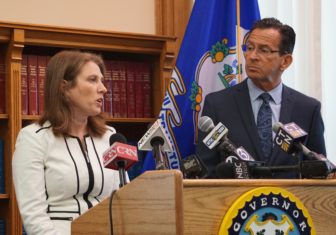 Gov. Dannel P. Malloy named Michelle Seagull as the commissioner of consumer protection Monday, putting the Harvard-educated lawyer in charge of an agency whose responsibilities include the regulation of casino gambling and the liquor and pharmaceutical industries, including medical cannabis.

Seagull, 41, who joined the Malloy administration as a deputy commissioner of consumer protection in May 2011, has been acting commissioner since the resignation last month of Jonathan Harris. She previously was a partner at Axinn, Veltrop & Harkrider, specializing in unfair-trade and antitrust litigation.

“Her  career experience in this area leaves me with no doubt that she will be a dynamic commissioner who will lead the agency enthusiastically on behalf of all of our residents,” Malloy said.

Seagull, who lives in Glastonbury with her husband and two children, said she made the move to state government six years ago to use her legal specialty in the public sector.

“It was an opportunity to continue doing work dealing with unfair competition, and it was a way to serve the public,” Seagull said. “I was looking for an opportunity to have more of a public service component to my career.”

The jurisdiction of the Department of Consumer Protection has grown while its staff has shrunk in recent years. It now licenses and registers more than 280,000 persons and businesses. One of its newer areas of oversight is the four facilities that produce and nine dispensaries that sell medical marijuana.

Seagull said the department has greatly streamlined its licensing and complaint processes.