State board members ‘outraged’ by number of young students suspended

Public schools in Connecticut suspended or expelled 1,674 students in preschool to Grade 2 during the last school year – despite state law limiting such discipline to students who are sexually or physically violent, bring a firearm to school or distribute drugs.

Presented with the data Wednesday by State Department of Education staff, members of the State Board of Education were visibly upset.

“I find it hard to believe that we have almost 2,000 students who are guilty of sexual assault” or other serious offenses, said board Chairman Allan Taylor of Hartford. State data show 44 percent were sent home for “fighting/battery,” 27 percent for “school policy violations,” 19 percent for a “physical/verbal confrontation/ conduct unbecoming,” and 5 percent for “personally threatening behavior.”

“I am trying to be calm,” said Estela López of East Hartford. “We know suspensions are not a learning tool – they are not a pedagogical approach to learning… It is not an acceptable approach to suspend kids.”

Most of the suspended youngsters were enrolled in the state’s 10 lowest-performing districts. Waterbury Public Schools had the most students given out-of-school suspensions last year at 137, followed by Hartford with 104, New Haven with 99, and Bridgeport with 64. 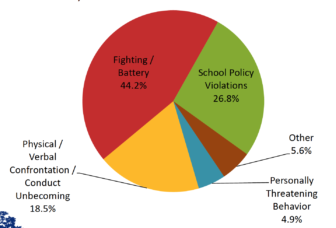 The chart shows the reasons for out-of-school suspensions for students in preschool through Grade 2.

Staring at a list of the school districts that sent home more than 15 youngsters, Donald Harris of Bloomfield, wanted to know what the state department was doing about it.

“That’s 532 babies who have been sent home,” he said, adding that a warnings to schools from the state is not enough. “It’s nice to get a letter from the commissioner – but what are we doing?”

“We tried to legislate a remedy and it’s still out of control,” echoed Joseph Vrabely of Glastonbury. “That’s unacceptable.”

At one point during the meeting, Terry H. Jones of Shelton turned to the three news reporters in the room to plead for coverage of the report so that districts would be publicly shamed.

“Our society reacts when the media shines a spotlight,” he said. “You are really able to move the dial when there is public outrage… I am really outraged at this.”

Waterbury Superintendent Kathleen Ouellette, who was at the state board of education meeting for another matter, said during an interview outside the meeting that her district is working to address the problem. She said that the district is overhauling its student handbook and discipline policies and has been providing professional development on the topic for staff.

“There has to be a climate change,” she said, adding that the numbers have improved significantly for the current year. No preschool students have been suspended or expelled and the number of those through grade 2 has been cut in half compared to this time last year, she said.

State Education Commissioner Dianna Wentzell said during the meeting that the department does not have enough staff to oversee and audit whether districts are improperly suspending pupils.

“Like a lot of educational laws, there is not a clear penalty,” she said. “We may still have awareness issues around the law.’

She explained that there are some very legitimate reasons for students to be suspended.

“A 5-year-old should not have to sit next to her abuser the next day,” she said.