Not without drama, the legislature’s Appropriations Committee voted Monday to approve and send to the Senate two of the session’s most controversial bills: one affecting the profitability of the Millstone Nuclear Power Station and another permitting the first casino off tribal lands.

The Millstone bill passed on a 23-21 vote, with several legislators indicating their support in committee might not mean a vote for final passage in the Senate, where as many as three Republican senators might abstain because of potential conflicts.

As a test vote, the committee’s action showed Millstone has lost support in the Senate, where a similar bill passed unanimously last year, then died from inaction in the House.

Three Democratic senators voted against the bill Monday: Joan Hartley of Waterbury, Mae Flexer of Killingly and Gayle Slossberg of Milford. A fourth, Gary Winfield of New Haven, said he voted yes only to keep the bill from dying in committee.

Sen. John Kissel, R-Enfield, abstained. He is employed by Eversource, which is lobbying against the bill. Two other GOP senators are likely to abstain if the bill comes to a vote in the Senate: Eversource also employs Kevin Witkos of Canton, and Art Linares of Westbrook has an ownership interest in an energy company.

Rep. Chris Perone, D-Norwalk, who voted for the Millstone bill when it came before the Energy and Technology Committee, opposed it Monday. He said legislators do not have sufficient information to judge if the bill is a windfall for Dominion Resources, the owner of Millstone, or a necessary step to stabilize the power plant.

“This is a black box,” Perone said.

To avoid the volatility of daily energy auctions, Dominion has long sold long-term energy contracts to hedge funds and other buyers, but competition from low natural gas prices has weakened that market. Dominion has been pressing for more than a year for a regulatory structure that would ease direct sales to electric companies in contracts of up to five years.

Environmentalists, consumer activists and other energy companies are lobbying against the bill. 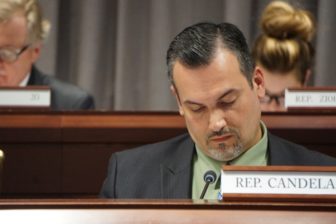 The casino bill passed without changes on a 33-13 vote after the intervention of House Speaker Joe Aresimowicz, D-Berlin, who persuaded Rep. Juan R. Candelaria, D-New Haven, to withdraw an amendment intended to protect pari-mutuel betting parlors.

The amendment would have required the new casino to set aside 5 percent of gross gaming revenue to offset job losses in the pari-mutuel industry.

After the committee recessed for a hasty conference, Candelaria returned to announce he was withdrawing his amendment at the request of Aresimowicz, saying the speaker promised talks would continue on how to protect the pari-mutuel industry.

“I shook hands. I believe in his word. And that’s why I retracted the amendment,” Candelaria said after the meeting.

The Mashantucket Pequots and Mohegans, operators of Foxwoods Resorts Casino and Mohegan Sun, want to jointly open a casino off I-91 in East Windsor to retain market share after MGM opens a resort casino in Springfield in 2018.

Attorney General George Jepsen said in a legal opinion in March that allowing the tribes to operate a casino off tribal lands would pose legal risks that “are not insubstantial” to the more than $250 million in slots revenue annually shared with the state. 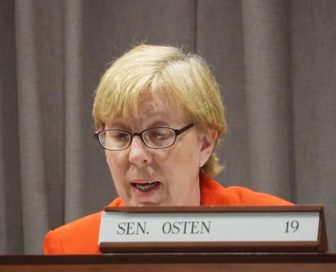 Jepsen said there is no guarantee that the Bureau of Indian Affairs would amend the state’s compact with the tribes. He also warned that MGM could win a claim in court that granting the tribes exclusive rights to a commercial casino without competitive bidding would violate the equal protection and commerce clauses of the Constitution.

The bill also has drawn opposition from opponents of gambling, including Rep. Fred Wilms, R-Norwalk. Before casting a no vote, he said he has relatives who are problem gamblers.

Sen. Cathy Osten, D-Sprague, a committee co-chair who strongly backs passage as a boost to a Connecticut industry, said, “There is some angst revolving around gaming that happens naturally.”

“The state faces serious financial challenges. We can be part of the solution,” said Rodney Butler, his counterpart with the Pequots.