DOJ bows to Blumenthal, other Dems in tapping Mueller to head Russia probe 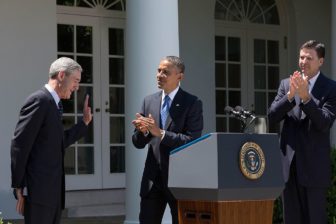 Washington – Buffeted by a series of developments that have shaken this city, Deputy Attorney General Rod Rosenstein on Wednesday announced the appointment of former FBI chief Robert Mueller as special counsel to lead the probe of Russian interference in U.S. elections.

The move was seen as a bow to Democratic demands for an independent prosecutor to lead the politically sensitive probe. As special counsel Mueller would report to the Justice Department, but is supposed to have independence in day-to-day operations.

“Based upon the unique circumstances, the public interest requires me to place this investigation under the authority of a person who exercises a degree of independence from the normal chain of command,” Rosenstein said in a statement. “A special counsel is necessary in order for the American people to have full confidence in the outcome. Our nation is grounded on the rule of law, and the public must be assured that government officials administer the law fairly.”

Mueller led the FBI for 14 years, during the presidencies of George Bush and Barack Obama, leaving the post in 2013. During his tenure he led the FBI investigation of the 9/11 attacks and launched special prosecutions into white collar crimes, resulting in the convictions of New York financier Bernie Madoff and former WorldCom CEO Bernie Ebbers.

In a statement after Mueller’s appointment, Trump said, “As I have stated many times, a thorough investigation will confirm what we already know – there was no collusion between my campaign and any foreign entity. I look forward to this matter concluding quickly. In the meantime, I will never stop fighting for the people and the issues that matter most to the future of our country.

The push for a special prosecutor was led by Democrats, including Sen. Richard Blumenthal, a member of the Judiciary Committee who voted against the confirmation of Rosenstein because the nominee would not commit to the appointment of a special prosecutor.

But a steady stream of Republicans joined that campaign this week. And public support for an independent probe is high. An NBC-Wall Street Journal poll released Sunday showed 78 percent of respondents said they would prefer an investigation led by an independent prosecutor or independent commission.

Blumenthal and others praised the appointment.

“Robert Mueller has the experience and expertise, guts and backbone necessary to uncover the truth and hold wrongdoers accountable,” Blumenthal said in a tweet.

Rep. Elizabeth Esty, D-5th District said, “Russia has engaged in a campaign to interfere in our elections, undermine our democracy, and weaken our nation.”

“The American people deserve to know the full scope of Russia’s activities, including who within the United States may have participated,” Esty said. “The appointment of Robert Mueller as special counsel is an immensely positive step toward determining the facts and preventing future attacks on our democratic institutions.”

Sen. Dianne Feinstein, D-Calif., said, “Bob was a fine U.S. attorney, a great FBI director, and there’s no better person who could be asked to perform this function. He is respected, he is talented, and he has the knowledge and ability to do the right thing.”

But still there were doubts about whether Mueller would be independent enough from the DOJ, where Attorney General Jeff Sessions was forced to recuse himself from the Russia probe after revelations he failed during his confirmation hearings to disclose meetings he had last year with the Russian ambassador.

Blumenthal in a tweet said Mueller’s appointment “is a welcome development –now must ensure resources and independence.”

Sen. Chris Murphy, D-Conn., also lauded Rosenstein’s move, saying. “It is an important step toward getting to the truth about the president’s connection to  Russia’s manipulation of the 2016 election.”

“But circumstances surrounding the firing of James Comey still raise significant questions about whether Mr. Mueller will be able to have both the resources and the latitude to get [to] the bottom of this unfolding crisis,” Murphy said. “Will President Trump attempt to interfere in the special prosecutor’s work, as he reportedly did in trying to influence Mr. Comey? Will Attorney General Sessions really stay clear of the investigation, or does his involvement in Comey’s firing suggest that he is only half-recused from the Russia inquiry?”

Rosenstein appointed Mueller on the eve of what was expected to be a contentious meeting with members of the Senate at the U.S. Capitol Thursday.

Murphy said, “I look forward to hearing from the deputy attorney general in closed session tomorrow.”

With these commutations, the Board of Pardons and Paroles is recognizing the science of juvenile brain development.