On DeVos’s wish list: $250M to ‘build the evidence base’ for vouchers 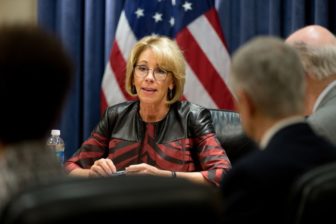 Recent research about private-school voucher programs has been grim: In Washington, D.C., Indianapolis, Louisiana, and Ohio, students did worse on tests after they received the vouchers.

Now, the Trump administration is looking for new test cases.

Their budget proposal, released Tuesday, asks for $250 million to fund a competition for school districts looking to expand school voucher programs. Those districts could apply for funding to pay private-school tuition for students from poor families, then evaluate those programs “to build the evidence base around private school choice,” according to the budget documents.

It’s very unlikely that the budget will make it through Congress in its current form. But the funding boost aimed at justifying private-school choice programs is one way U.S. Education Secretary Betsy DeVos is delivering on years of advocacy for those programs. On Monday, she promised the Trump administration would soon lay out the “most ambitious expansion of school choice in our nation’s history.”

DeVos and others say vouchers are critical for helping low-income students succeed and also helping students in public schools, whose schools improve thanks to competitive pressure. Private school-choice programs have also come under criticism for requiring students with disabilities to waive their rights under IDEA and for allowing private schools to discriminate against LGBT students.

Bill Cordes, the education department’s K-12 budget director, told leaders of education groups Tuesday that the “sensitive” issues around the divide between church and state and civil rights protections for participating students would be addressed as the program is rolled out.

Originally posted on Chalkbeat by Sarah Darville on May 23, 2017. Chalkbeat is a nonprofit news site covering educational change in public schools.