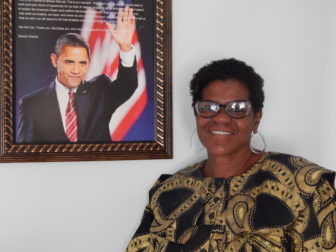 Washington — Kimberly Hart of New Haven is among more than 400,000 Connecticut residents who depend on food stamps — a program that would be cut under President Donald Trump’s budget, which also shifts some of the responsibility for feeding those in need to individual states.

Hart, 55, is a member of New Haven’s Food Policy Council and participates in several advocacy groups for social and economic issues.

She said she has been unemployed since 2013, and relies on the Supplemental Nutrition Assistance Program, the official name for food stamps to put food on the table for herself and her 15-year-old son. Her husband died in 2011.

President Trump’s budget would cut about 25 percent from the Supplemental Nutrition Assistance Program over the next 10 years, largely by shrinking eligibility for the program. Food stamp benefits are now paid entirely by the federal government, but the president’s budget would gradually shift up to 25 percent of that cost to the states.

“If you think about how strapped state budgets are, many states are going to have to say ‘no,’ “said Rep. Elizabeth Esty, D-5th District. “It would be an enormous hit to Connecticut, which is struggling with its budget already.”

If Connecticut were unable to pick up its share of the tab, benefits could shrink for everyone, including people like Hart, even though she is caring for a child.

The Center for Budget and Policy Priorities, an advocate for social welfare programs, estimated the cost shift would cost Connecticut’s government nearly $2 billion over 10 years.

Stacy Dean, the center’s vice president for food assistance policy, said that estimate might be too low because the federal government’s cost-shift formula is likely to strip more money from high-income states like Connecticut and less money from poor states like Mississippi.

While many of the Trump budget cuts face a pushback from Congress, Republican members of Congress, especially those in the U.S. House of Representatives, have pushed to cut SNAP for years.

Their arguments echo the one made last week by Office of Management and Budget Director Mick Mulvaney, who noted that, while the recession is long over, about 42 million people still receive SNAP benefits, far more than when the recession began. In 2008, there were 28 million recipients.

Mulvaney sees that as evidence many Americans are getting food assistance when they should be working.

“Isn’t it reasonable for you to at least ask the question, ‘Are there people on that program who shouldn’t be on there?’” he asked.

Advocates for the food stamp program say the reason the number of recipients has not dropped since the recession officially ended in 2009 is that many did not know they were eligible for the aid before the recession, which prompted aggressive outreach by many states. The second reason, they say, is that the recovery has been uneven, and many people still are having trouble putting food on the table.

“We want to work,” said Hart. “I want to become self-sufficient.”

Dean said House GOP-proposed budgets sought deep cuts in the SNAP program during the years President Barack Obama was in office, but the Senate and the White House rejected them.

But with Trump in the White House, Dean said, “there’s good reason for concern now.”

More than 400,000 Connecticut residents receive food stamps. If the SNAP eligibility changes become law, thousands would lose their benefits, entirely or in part.

Besides cutting food stamps, and other social welfare programs like Medicaid, Trump’s budget also would eliminate the Low Income Heating Assistance Program that helps many in Connecticut pay their energy bills. Under current food stamp regulations, those who receive LIHEAP also are eligible for additional food stamp benefits that average $110 a month.

The end of LIHEAP would end the additional SNAP benefits for about 7,100 people in the state, said Lucy Nolan, executive director of End Hunger, Connecticut!

The Trump budget also would cap SNAP benefits, which are determined by income level and the number of people in a household to households of no more than six.

That means larger families would receive a maximum monthly benefit of $925, no matter how many people need to be fed.

The Trump budget also would eliminate thousands of “able-bodied” adults without children from SNAP unless they work at least 20 hours a week or are in a monitored job training or job search program.

Currently, those individuals are eligible for benefits – whether they have a job or not — if they live in a community with an unemployment rate that’s higher than the national average. Nolen said there are about 58,000 “abled-bodied adults without dependents” who qualify for SNAP in 124 Connecticut towns.

We need people to go to work… If you’re on food stamps, and you’re able-bodied, we need you to go to work,” Mulvaney said.

But to Nolan, those unemployed recipients can’t find jobs.

“(SNAP) is the one program they can get to help them,” she said.

‘Do right and feed everyone’

Esty, who will hold a roundtable in Waterbury Wednesday to discuss the future of SNAP, said GOP efforts to cut food stamps and other social programs are based on a flawed ideology.

“They see this as a dependency that’s sapping the independent spirit of America,” she said.

Conservative groups like the Cato Institute say there’s enormous “fraud and abuse” in the system, and that recipients are more obese than other Americans because they use their benefits to buy “sugary soft drinks” and cookies. To Cato, there’s not a hunger problem, but an excess calorie problem.

“The way to reform the food stamp program is to end federal involvement and transfer the full funding and administration to the states,” a recent Cato policy paper said. “Each state could decide to provide benefits either more or less generous than current benefits, and each state could decide whether or not taxpayers should subsidize soft drinks, candy, cookies, snack crackers, and ice cream.”

Hart said many people receiving food stamps tend to buy less healthy food and beverages because they do not have any other choice.

“We all know that fresh is best,” Hart said. “ But she said she sometimes buys unhealthy food “because of the disparity of the prices and because of the little bit I’m getting.”

“Two and a half gallons of 100 percent apple juice is maybe going to cost me like $2.39 a bottle, so that’s $5. I could buy five gallons of fruit-flavored, fruit punch mix and get that for $1,” she said.

Nolan said the Trump budget has put food stamp advocates on “high alert.” She also said it would be foolhardy for the federal government to shrink a program that helps people during tough times – the average length of time a participant stays on SNAP is nine months, Nolan said – and brings federal dollars into a local community.

“It is a flexible program, and it works,” she said.

Under questioning last week by Rep. Rosa DeLauro, D-3rd District,  Secretary of Agriculture Sonny Perdue split with the White House over the changes needed to the food stamp program. Farm groups have joined anti-hunger groups in opposing the Trump budget changes in the program.

At a  hearing of the House Appropriations subcommittee on agriculture, Perdue   assured DeLauro, a champion of the program, that SNAP is not broken and doesn’t need to be fixed .

“The new motto of USDA is ‘do right and feed everyone,’” Perdue said.

Later in the hearing, however, Perdue said he favored stricter work requirements for SNAP recipients.