A rare cliffhanger in the House over a judicial nomination 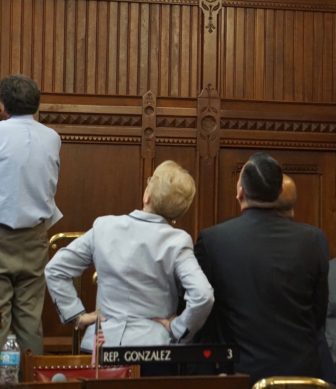 The House of Representatives engaged in a rare drama Tuesday by opening a roll-call vote over a judicial confirmation when the outcome was in doubt. It ultimately confirmed the nomination of Barry F. Armata of Suffield as a judge of the Superior Court by a vote of 78 to 71.

Rep. Minnie Gonzalez, D-Hartford, a harsh critic of the family court system and those who practice before it, including fellow members of the General Assembly, led opposition to Armata over questions about fees he charged as a court-appointed guardian ad litem of a minor child.

Gonzalez barely stopped short of accusing Armata of lying under oath before the legislature’s Judiciary Committee, saying his answers to her questions about his billing practices were inaccurate. “I could say a different word, but I want to stick with he didn’t give me accurate information,” Gonzalez said.

Gonzalez, one of the non-lawyers on Judiciary, said Armata and other lawyers who practice in family court are members of the Association of Family and Conciliation Courts, a group of professionals who she says recommend each other’s appointments in difficult custody cases.

Minnie Gonzalez and her fight with the courts

The Judiciary Committee’s Democratic co-chair, Rep. William Tong of Stamford, and its ranking Republican, Rep. Rosa C. Rebimbas of Naugatuck, defended both Armata and the committee’s review of his qualifications to join the ranks of the state’s trial judges.

“There is no cabal,” Tong said.

Tong said guardians and other professionals, including psychologists, are appointed to represent the interests of minor children. The bills typically are paid by the parents.

“Those folks are brought in when they are needed, when a husband and wife cannot work it out among themselves,” he said. “It’s in those cases that the fees, not coincidentally, tend to be quite high.”

With a core group of House Republicans opposed to all new judicial nominations for budget reasons, Armata was especially vulnerable to the line of attack mounted by Gonzalez. Seventeen House Republicans voted against four nominees Tuesday.

When judicial nominations are derailed, it typically happens in the Judiciary Committee, where the prospect of a negative vote sometimes prompts candidates to ask that their nominations be withdrawn. Tong could not recall the last nomination defeated on a floor vote.

The initial vote on Armata was 72 to 68, with nine members not voting. Legislators rushed to be recorded before the vote was finalized, or “locked” in legislative parlance. Legislators stared at the tally board as one colleague rose to vote no, two to vote yes, then two more nays, followed by a yea to produce a vote of 75 to 71 — just one short of absolute majority of 76 in the 151-seat chamber.

Then Rep. Joe Verrengia, D-West Hartford, stood and asked “to be recorded in the affirmative,” a 76th vote guaranteeing the confirmation of Armata, a Suffield lawyer previously confirmed by the Senate. Two others added yes votes for a final tally of 78.

Armata, a partner at Brown, Paindiris & Scott in Hartford, is a graduate of Boston College and Syracuse University College of Law. He was one of 13 lawyers nominated last month by Gov. Dannel P. Malloy to the Superior Court, where one in every five of the 185 positions are vacant.