Malloy, Fasano team up to push for plan to cover current deficit 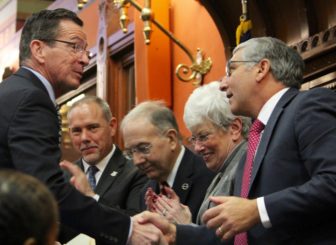 Connecticut got its first look — albeit behind-the-scenes — at a nontraditional political alliance last week.

Gov. Dannel P. Malloy and Senate Republican leader Len Fasano teamed up to block some last-minute spending changes until the full legislature and administration can adopt a plan to cover the current budget deficit.

“It’s irresponsible,” he said. “And if people think all of Wall Street is not watching us, they are simply naive — dangerously naive.”

Over the course of four business days between May 12 and 17, Connecticut’s bond rating was downgraded by Moody’s Investors Service, Fitch Ratings Inc. and by S&P Global Ratings. The state has sustained six downgrades among these three agencies and Kroll Bond Rating Agency over the past 12 months.

“In light of our current economic reality and the recent response Connecticut received from all four credit rating agencies, it is hard to justify any reason to postpone taking immediate action to bring this fiscal year into balance,” Malloy wrote Tuesday morning in a letter to legislators. “Further, concluding this business will allow us to focus fully on arriving at a balanced biennial budget. We ask you to act responsibly on this matter and to pass both a deficiency bill and a deficit mitigation package without delay.”

At first glance, the issue is centered on the “deficiency bill,” a largely technical measure enacted annually to resolve projected overspending by agencies and departments in the final weeks of the fiscal year.

Legislators from both parties had developed a plan to cover additional spending needs totaling about $19.5 million, including:

To cover these needs, lawmakers would redirect $19.5 million in projected surplus funds from a fringe benefits account.

But while this measure wouldn’t worsen the overall deficit in the current fiscal year, it lacked any plan to cover the shortfall — something traditionally included in the deficiency bill whenever a net deficit is projected.

The regular legislative session ends on June 7, and Malloy forwarded a plan to cover the deficit three weeks ago.

“If we continue to say ‘don’t worry about it’ and we continue to spend without showing we care about balancing the budget, we are sending a message we are fiscally careless,” Fasano said.

The governor has limited statutory authority to reduce spending unilaterally, and he used rescissions to reduce the projected shortfall over the past two weeks to $323 million.

Malloy asked lawmakers to take several other steps, including:

These steps, if approved, would bring the deficit close to about $235 million. Connecticut then could cover the rest, under Malloy’s plan, by draining nearly all of its emergency reserve, commonly known as the rainy day fund.

Senate Republicans developed an alternate plan to preserve funding for towns, hospitals and state parks, relying largely on additional fund sweeps to do so.

The bill was supposed to run Thursday night in the Senate. Democrats and Republicans are split 18-18 there, but Lt. Gov. Nancy Wyman, who can cast a tie-breaking vote, gives Democrats an edge.

Still, Fasano invited the Malloy administration to offer adjustments to the Senate GOP deficit-mitigation plan, and then prepared to tack that on as an amendment to the deficiency bill.

The Senate Republican leader was optimistic his plan would have enjoyed support from Wyman. And while the lieutenant governor’s statement Friday did not say specifically how she would have voted, it implied Wyman would support Fasano’s position.

“We’ve got to do what’s best for Connecticut taxpayers,” Wyman said. “Building a responsible, sustainable budget requires us to put partisanship aside. What happened in the House was surprising—I encourage the Senate to run deficit mitigation and deficiency plans together.”

All three leaders said deficit-mitigation remains a priority, but they didn’t want to hold up the deficiency measure since legislators from both parties are concerned about the Birth-to-Three program.

“I think there is a good chance we can come to an agreement,” Klarides said. “As long as all of the goals (covering deficiencies and deficit-mitigation) are achieved in a reasonable amount of time, then that is acceptable.”

But Aresimowicz said, “It’s unfortunate that Senator Fasano spends more time complaining on how the process went than finding solutions,” adding that he agrees with Klarides that all issues will be resolved soon.