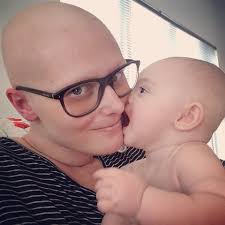 Cancer survivor Melissa Thompson of Stamford and her daughter, Poppy.

The State Senate has given unanimous approval to a bill that would ensure fertility coverage for those facing chemotherapy or some other medically necessary treatment that threatens their ability to have children.

The measure, approved late Friday, was passed unanimously by the House on May 25 and now heads to Gov. Dannel P. Malloy’s desk.

“Do we need to sacrifice our future families to be a cancer survivor? I don’t think we should have to,” said Melissa Thompson, the 33-year-old Stamford woman who’s personal struggle largely inspired the legislation.

Diagnosed with stage three breast cancer at 32, shortly after giving birth to her first child — her daughter, Poppy — Thompson was facing chemotherapy that would threaten her ability to have more children.

She initially received authorization from her insurance carrier for a procedure to preserve her eggs for future pregnancy.

But two weeks later the insurer reversed its position because of her cancer diagnosis.

Thompson made the decision to cover the $12,000 cost herself, but said Saturday that some people don’t have that financial option.

“Cancer patients have little-to-no time after a diagnosis to decide what their future looks like in terms of family,” she said. “When faced with exorbitant costs, it leads patients to ask themselves: ‘Should I pursue a less toxic chemotherapy to then protect my fertility?’ I had to put it on a credit card that I am still trying to pay off.”

Thompson added that the bill would bring Connecticut’s insurance rules into compliance with modern medical standards.

“While we must review every piece of legislation thoroughly, we commend the proponents of this bill for their thoughtful, industry-informed approach to this proposal,” Malloy spokeswoman Meg Green said. “This is exactly what Governor Malloy has called for — when addressing gaps in coverage, policymakers should also consider the insurance industry’s expertise and the impact legislation will have on healthcare costs for all consumers.”

“This is a small bill in the grand scheme of things, but one that will be incredibly meaningful to those impacted by it,” said Bryte Johnson, director of government relations for the American Cancer Society Cancer Action Network. “It provides hope and peace of mind, allowing cancer patients to focus on recovery rather than having to make the heart-wrenching, difficult choice between treatment and the ability to have children. And it is a shining example of the power of a single, determined and passionate advocate.”

Fertility preservation procedures for women generally are much more expensive than those for men.

“Through her tenacity and smarts we were able to pass a good bill,” Lesser added.