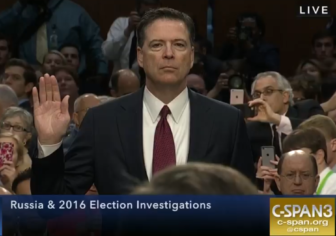 Washington – This city was transfixed Thursday by former FBI Director James Comey’s testimony to the Senate Intelligence Committee, and Sen. Richard Blumenthal was among those had a front-row seat during the riveting three hours of questioning.

He said Comey painted a “chilling picture” of his contacts with President Donald Trump.

While he was among the spectators, Blumenthal is not a member of the Intelligence Committee so he could not question Comey. But like many, the Democratic senator watched the former FBI chief calmly recount awkward and uncomfortable meetings with a president who ultimately fired him.

“The whole picture was how much the president was trying to insulate himself, his family and his friends from an investigation,” Blumenthal said.

In written testimony released by the committee Wednesday, Comey described nine conversations with Trump, in person and over the telephone. He had made notes of those contacts right after they occurred.

Asked about his first meeting with Trump, who was then president-elect, Comey said he was compelled to take notes “because…I was talking about matters that touched on the FBI’s core responsibility and it related to the president-elect personally — and then the nature of the person — I was honestly concerned he might lie about the nature or our meeting.”

During three hours of questioning, Comey said he had arranged the leak of details of a private conversation in which the president told the former FBI chief he hoped he would back off an investigation of former National Security Adviser Michael Flynn. Comey said he gave the information to a friend to leak to a New York Times reporter in the hopes it would spur appointment of a special counsel to investigate possible collusion by the Trump campaign and Russians who tried to influence the outcome of the U.S. elections. Under increasing pressure, the Trump administration appointed former FBI chief Robert Mueller to that post.

Responding to questioning by Republicans, Comey said Trump was not under investigation. But he also said, “I know I was fired because something about the way I was conducting the Russia investigation was putting pressure on (Trump).’’

When pressed on whether he felt the president might have obstructed justice in firing him, Comey said that was a decision to be made by the special counsel. Comey has given copies of all of his memos to Mueller.

“Every day, it seems like the walls are closing in on this president,” said Sen. Chris Murphy.

He said if the White House disputes Comey’s account of his meetings with Trump,”the American people deserve to hear the president’s side of the story in a similar forum – under oath and open to the press.”

“It’s hard to overstate the impact of Jim Comey’s testimony today,” Murphy said. “For the first time, under oath and penalty of perjury, the former FBI director testified that the president repeatedly pressed him for a pledge of loyalty, and asked him to drop the investigation into illegal activity of a White House staffer at the center of the Russia probe.”

Some Connecticut Democrats raised the question of whether Trump’s comments about Flynn could be considered obstruction of justice.

“While I am not a lawyer or a prosecutor, it appears that President Trump worked to impede the Russian investigation,” said Rep. Rosa DeLauro, D-3rd District.

Rep. Jim Himes, D-4th District, said, “Whether this irresponsible behavior rises to the level of obstruction of justice is a question for federal law enforcement under the direction of Special Counsel Robert Mueller.”

Blumenthal is a member of the Senate Judiciary Committee, which has its own Russia probe. In the House, the Government Oversight Committee and the Intelligence Committee, of which Himes is a member, are also investigating possible ties between the Trump campaign and Russia.

Comey on Thursday said he believed these congressional investigations would not hamper the work of special counsel Mueller.

Blumenthal said he hopes Comey agrees to be a Judiciary Committee witness “because there are remaining questions to be asked.”

Trump’s personal attorney, Marc Kasowitz said in a statement after Comey’s testimony that the former FBI director’s leak of information should be subject to an investigation.

“Today, Mr. Comey admitted that he unilaterally and surreptitiously made unauthorized disclosures to the press of privileged communications with the president,” Kasowitz said. “We will leave it to the appropriate authorities to determine whether (these) leaks should be investigated along with all those others being investigated.”

“The president’s new at this,” House Speaker Paul Ryan said at a news conference. “He’s new at government.” He said the president wasn’t “steeped in the long-running protocols” of how to interact with law enforcement.