Trump transportation plan may not help Connecticut much 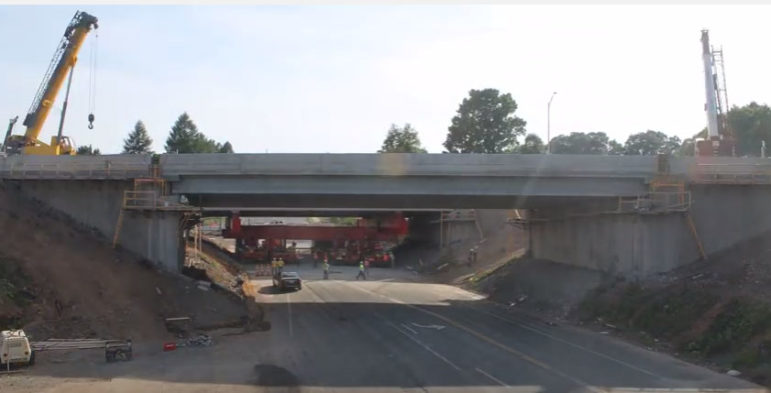 The I-84 bridge replacement in Southington.

But the week-long rollout was thin on details, and what is known of the plan may not be of much help to Connecticut, especially since the president has also plans to cut federal money that funds much of the state’s transportation projects.

Trump’s basic idea is that the federal government will spend $200 billion in grants and tax breaks to give private businesses incentive to spend money on infrastructure programs.

With state and local contributions as well, the program would cost $1 trillion.

“Together we are going to rebuild America,” Trump said.

Through a formula, the state received about $645 million this year for highway and transit programs — its share of the payout from the federal Highway Trust Fund funded by federal gasoline taxes and other revenues. Trumps’ budget would keep the outlays from the trust fund flat for several years, then begin reducing them to save about $96 billion over 10 years.

One is the Transportation Investment Generating Economic Recovery, or TIGER grant program that provided New Haven with $20 million last year to build a new downtown crossing. Other TIGER grants were used to extend a freight rail line form New London through Norwich, Franklin, Willimantic and north to Stafford and to improve pedestrian and biking access to Union Station in Hartford.

Donald Schubert, president of the Connecticut Construction Industries Association, said Trump’s plans to cut traditional highway funding “is really bad for Connecticut,” because the state receives generous funding through the trust fund and U.S. Department of Transportation grants that are on the chopping block.

“Our congressional delegation has been very good in paying attention to the TIGER program,” he said.

Schubert also said the shift toward private investment in infrastructure won’t do any good in Connecticut.

“Connecticut is not ready for public-private partnerships,” Schubert said. “Investors don’t want to wait 10 or 15 years to invest in a project. They want to make their investment now and Connecticut has nothing that’s ready to go.”

Schubert also said “at this point [Trump’s plan] is missing the core federal funding it needs to succeed.

A spokesman at the Connecticut Department of Transportation did not have an immediate comment on the Trump plan.

But a transportation lobbyist in Washington said there is concern that there are “scant details” of an infrastructure plan that was  a key promise of the Trump election campaign.

“It’s also unclear where that $200 billion is going to come from, or how it will be spent,” the lobbyist said.

Another concern for the nation’s public officials and construction industry is that Trump has broadened the definition of “infrastructure” to include waterworks, oil and gas pipelines and even broadband networks.

When Trump campaigned on the promise of a $1 trillion infrastructure plan, many Democrats said they would support the effort. But none of them rallied around Trump’s plan this week.

“A private-sector-driven infrastructure plan means tolls, tolls, tolls — paid by average, working Americans,” said Senate Minority Leader Charles Schumer, D-N.Y. “ It also means that infrastructure that can’t be built with tolls, like repairing our crumbling schools, for instance, will likely get left behind.”

“Despite campaign promises to release a plan, so far President Trump has announced a permitting council that already exists, and a vague plan to create $1 trillion in infrastructure improvements with a mere $200 billion investment,” she said. “Recycling campaign talking points does nothing to put shovels in the ground, bridges over rivers, or Americans into jobs. The American worker deserves concrete action from this Administration, not more rhetoric.”

For several years DeLauro has championed the idea of a “National Infrastructure Bank” that would leverage private sector dollars to supplement current transportation funding. The bank would provide loans and loan guarantees to projects, issue ‘Public Benefit Bonds” to fund projects, and make payments to help states and localities cover their bond interest payments. The White House, however, has rejected that idea.

Trump began his “Infrastructure Week” with the release of a plan on Monday to privatize the nation’s air traffic controller system, pointing to other countries that have done so.

The plan was hailed by the nation’s largest airlines,  but  received pushback from Democrats and from  organizations representing charters and private aircraft.

“It’s difficult to see how one ‘Makes America Great Again’ by emulating foreign air traffic control systems that are smaller and demonstrably less safe than our own,” said National Air Transportation Association President Martin H. Hiller. “The Trump proposal introduces significant uncertainty to the world’s largest, most complex and safest air traffic control system, offering a radical solution to issues that can be addressed within the FAA’s current framework.”