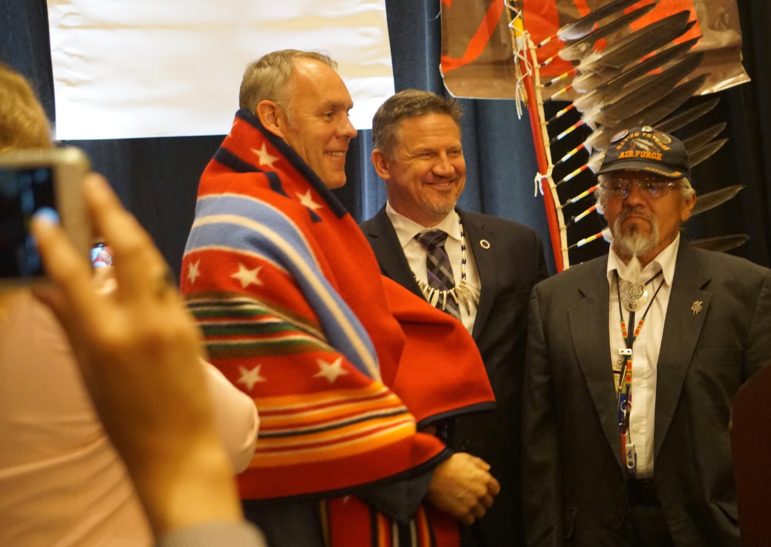 Interior Secretary Ryan Zinke wears a “veteran’s blanket” presented Tuesday. At center is Kevin Brown of the Mohegan tribe and a fellow vet.

Uncasville — Interior Secretary Ryan Zinke, the face of a Trump administration whose approach to the federal budget and its oversight of Indian country is skeptically viewed by many tribes, was welcomed here Tuesday by Connecticut’s two federally recognized tribes as an ally in their casino fight.

Addressing the National Congress of American Indians, Zinke pledged to establish a relationship of respect and consultation with the nation’s 567 federally recognized tribes and reassured them that President Trump’s deep budget cuts at Interior were not a prelude to dismantling the Bureau of Indian Affairs.

“My pledge is to work with you, partner with you and be your advocate and fix a system that is broken,” Zinke said in remarks delivered to the nation’s largest inter-tribal association in a ballroom at the Mohegan Sun gambling resort. His appearance came one day after he propose greatly shrinking a 1.3 million-acre National Monument designated by President Obama.

Zinke, 57, a former Navy SEAL commander and Montana congressman, was making his first visit to tribal lands in Connecticut as the Mohegan and Mashantucket Pequot tribes are celebrating authorization by the General Assembly to jointly build a casino in East Windsor to compete with the MGM Resorts International casino under construction in Springfield.

Also attending the association’s mid-year conference was Zinke’s acting deputy, James E. Cason, who played a role in the legislative fight over what would be Connecticut’s third casino and its first off tribal lands by signing a technical assistance letter reassuring legislators that the joint project would not jeopardize the state’s existing compacts with the tribes — or a revenue-sharing deal that has produced $7 billion since 1993.

Cason downplayed the role his letter played neutralizing an MGM talking point that the third casino would run afoul of the Bureau of Indian Affairs, which comes under the secretary of the interior. His letter said that history was on the tribes’ side when they say that the Bureau of Indian Affairs or Department of the Interior have respected existing compacts between the states and tribes. 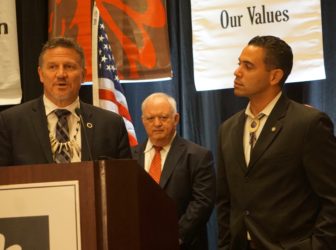 “It was a simple matter,” Cason said Tuesday.

Kevin Brown, the tribal chairman of the Mohegans, who has complained for months that MGM was exaggerating the complexity of the issues the third casino would raise for the Bureau of Indian Affairs, said he was glad to hear Cason declare the issue to be simple.

“That’s exactly right,” Brown said. “That’s what make this conversation so frustrating to me, because anyone who is truly in a position of of authority on this matter doesn’t understand  all the hoopla, which should be a signal or message all itself.”

MGM largely has conceded the BIA is no obstacle to the new casino, but it pledges to fight the authorization in court, arguing that the state violated the Equal Protection and Commerce clauses of the Constitution by not subjecting rights to the state’s first commercial casino to open competition. The state is justifying its decision as keeping with a longstanding agreement with the tribes giving them exclusive rights to gaming in return for 25 percent of gross slots revenue, estimated to be worth $266 million this year.

Brown and Rodney Butler, his counterpart at the Mashantucket Pequots, said they briefly met privately with Zinke, as did Gov. Dannel P. Malloy. Brown, a West Point graduate who left the Army as a colonel who served as a battalion commander in Iraq, was part of a contingent of former servicemen who presented Zinke with a “veterans’ blanket.” Brown said he and Zinke were in the same region of Iraq around the same time.

The two tribal chairs publicly thanked Cason, presenting him with a gift blanket before the assembled tribes, a gesture a Mohegan official says they first cleared with ethics lawyers at the Department of Interior. 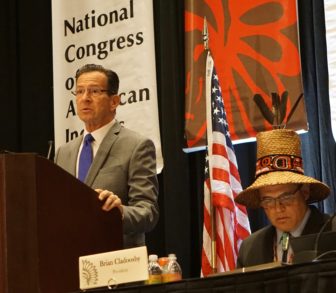 Gov. Dannel P. Malloy and Brian Cladoosby, a Swinomish leader and president of the National Congress of American Indians.

“This is a very historic time for the Mohegan and Pequot Tribes, two tribes that were once one in the early 1600s, two tribes that have competed against each other, combatted each other, separated from each other and competed on the landscape of gaming nine miles apart with two casinos of nearly equal size, two of the largest casinos in the western hemisphere,” Brown said. “We are now joined together again as tribes, as a family and as business partners in a venture to build a third casino in the state of Connecticut, a commercial venture off reservation.”

Brown thanked Malloy for standing with the tribes, then said the Bureau of Indian Affairs played a crucial role in reaffirming it remained supportive under the new administration of President Trump. Butler, a delegate to Democratic National Convention, concurred.

“This really came down to whether Interior would stand up for Indian country or a commercial venture,” Butler said.

Zinke did not mention the casino issue in his remarks to the association and declined comment as he departed the casino for an official visit to Maine.

While some Indians viewed the sweeping budget cuts Trump proposed for Interior and other agencies as a step toward dismantling the Bureau of Indian Affairs, Zinke told the association the proposal was a starting point, nothing that reflects the support Congress ultimately would show for his department and Indian country.

He defended his recommendation to shrink the size of the Bears Ears National Monument in Utah, saying that antiquities and prehistoric sites would be protected. Zinke said he is asking Congress to authorize the co-management of the monument with local tribes.

The nomination of Zinke, a congressman from a western state familiar with Indian issues, was welcomed, said Brian Cladoosby, the president of the National Congress of American Indians and a longtime leader of the Swinomish Indian Tribal Community in Washington State.

In 2015, the Bureau of Indian Affairs released final Indian recognition rules that would bar three Connecticut tribes that have been denied federal recognition, the Eastern  Pequot Tribal Nation, the Golden Hill Paugussett Nation and the Schaghticoke Tribal Nation, from reapplying for federal acknowledgment.

Cason and Nedra Darling, the director of public affairs for the assistant secretary who oversees Indian affairs at Interior, said they are aware of no plans by the Trump administration to revisit those rules.

In welcoming remarks, Malloy told the audience that he views the Mohegans and Pequots as sovereign nations to be respected and major employers to be supported.

“I don’t mind saying, and I think they agree wth me, that we have made great progress in that relationship,” Malloy said. “And so I absolutely wanted to be here to greet you and welcome you to  the state of Connecticut. I do that to honor you, to honor your members, to understand our history, to build a better America together, to have other Americans understand this intricate relationship that we must have and attend to.”