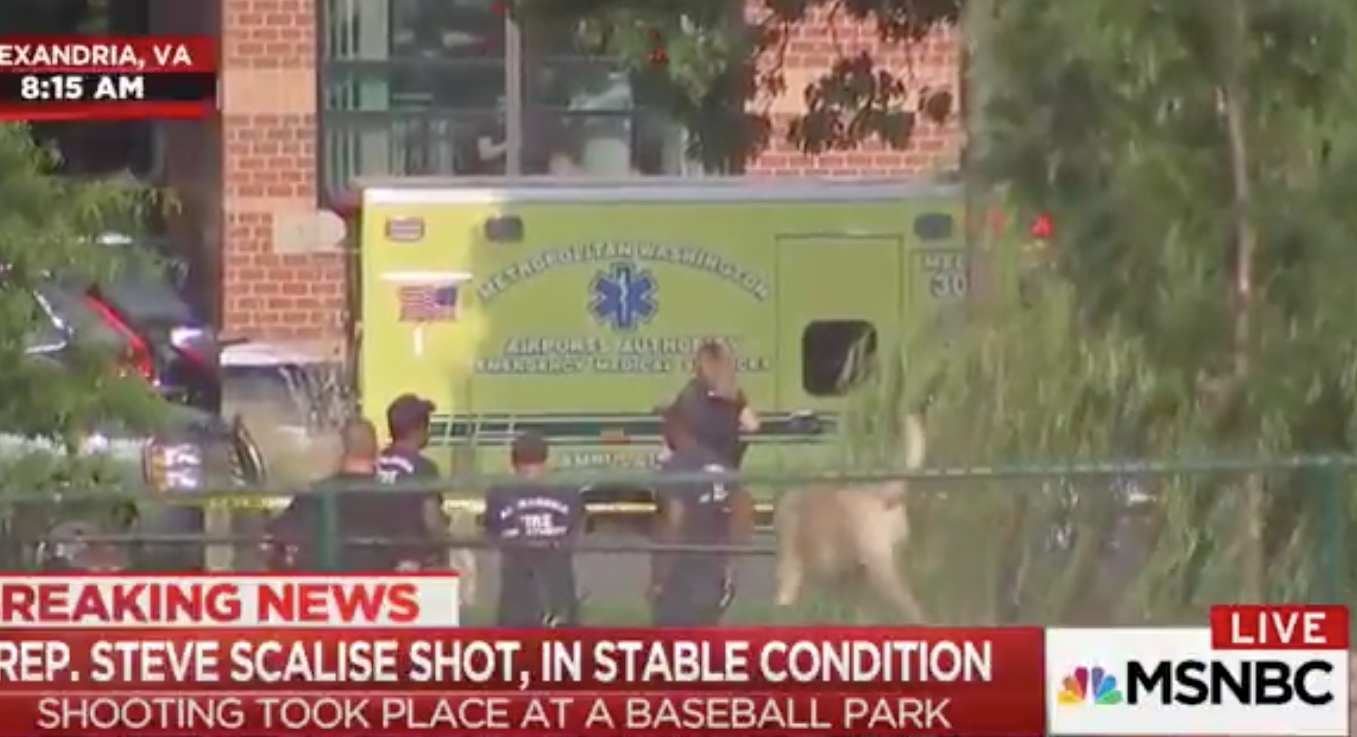 The scene after the shooting at the GOP baseball team’s practice.

Updated at 3 p.m. with comments from House Speaker Paul Ryan.

Washington – Connecticut lawmakers, for whom gun violence has a personal edge because of the Newtown shootings, reacted with shock and horror at a gunman’s attack on a Republican congressional baseball practice early Wednesday.

When he learned of the attack at a field in Northern Virginia, Sen. Chris Murphy, who plays as the catcher on the Democratic baseball team, tweeted “Oh my God.” The Democrats were practicing for the annual, bipartisan congressional baseball game at Gaulladet University, a school for the deaf in Washington, D.C.

Rep. Steve Scalise, R-La., the House majority whip, was among those shot by the gunman, who was identified as James Hodgkinson, 66, of Illinois.

President Donald Trump announced that the alleged gunman is dead.

“Authorities are continuing to investigate the crime and the assailant has now died from his injuries,” Trump said in a brief statement in the Diplomatic Room of the White House.

Four others, two members of the Capitol Police force, a House staffer and a lobbyist for Tyson Food were were injured and taken to  local hospitals.

Murphy followed up with another tweet. “We are all pulling for you @SteveScalise. My heart is with you, the Capitol Police, and everyone who was on the scene.”

Scalise’s office said he was shot in the hip, underwent surgery and is in stable condition.

In an interview, Murphy said he did not attend practice Wednesday morning with fellow Democrats but often does. 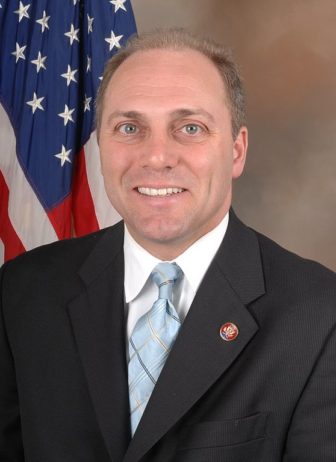 “These practices are a lot of fun,” he said. “The Capitol baseball game is one of the things that is right with Washington. I got to know a lot of my friends in Congress by playing in this event.”

Murphy said “this shooting is closer to home” but it would do nothing to change the discourse on gun violence.

“It is one of the many shootings that will happen across the country today,” he said.

Rep. Jim Himes, D-4th District,  tweeted, “Horrified by the attack on the Congressional family in VA this morning. Praying for those injured and grateful for those who keep us safe.”

Because Scalise is on the House GOP leadership team, there were Capitol police officers at the practice. Witnesses say they returned fire.

“I am hopeful we can put aside politics and support all affected,” tweeted Sen. Richard Blumenthal.

He described a photo of Democrats who were practicing for the congressional baseball game gathered in prayer this morning after hearing the news.

“We feel so deeply about the things that we fight for and the things we believe in … but we do not shed our humanity when we enter this chamber,” he said. “These were our brothers and sisters in the line of fire. ”

While lawmakers tried to keep politics out of their comments about the shooting, social media was ablaze with partisan blame after the suspected shooter was identified as a former volunteer with Sen. Bernie Sander’s presidential campaign.

“I have just been informed that the alleged shooter at the Republican baseball practice this morning is someone who apparently volunteered on my presidential campaign. I am sickened by this despicable act,” Sanders said on the Senate floor. “Let me be as clear as I can be: Violence of any kind is unacceptable in our society, and I condemn this action in the strongest possible terms. Real change can only come about through nonviolent action, and anything else runs counter to our most deeply held American values.”

“Keeping everyone at this morning’s Congressional baseball practice and their families in my prayers,” she said.

Sen. Rand Paul, R-Ky., who was among those practicing, told CNN,  “The field was basically a killing field.”

Events at the Capitol were canceled because of the shooting, including a press conference Blumenthal had scheduled with other Democrats to announce the filing of a lawsuit against President Donald Trump last night.

The lawsuit accuses Trump of violating the Foreign Emoluments Clause of the U.S. Constitution, which forbids a president from enriching himself or herself form a foreign source.

Committee hearings were postponed, as was any official action on the House floor.

Lawmakers, including Murphy, wondered whether security for all members of Congress would be stepped up after the shooting.

Mostly members reacted with shock and concern for the injured.

“Steve Scalise is a loyal public servant who has represented his constituents in Louisiana honorably for many years,” Courtney said. “It is beyond comprehension why anyone would attack other human beings in this way. Like other Americans, I will be monitoring the news this morning and hoping that all of the injured are able to make a swift recovery.”

The  annual Congressional baseball game is a Capitol Hill tradition that dates back  to the early part of the 20th Century.

This year’s game, scheduled for Thursday night, was planned to be played in honor of the victims of the British terrorist attacks. The game, which takes place in National’s Park, will be played as scheduled. 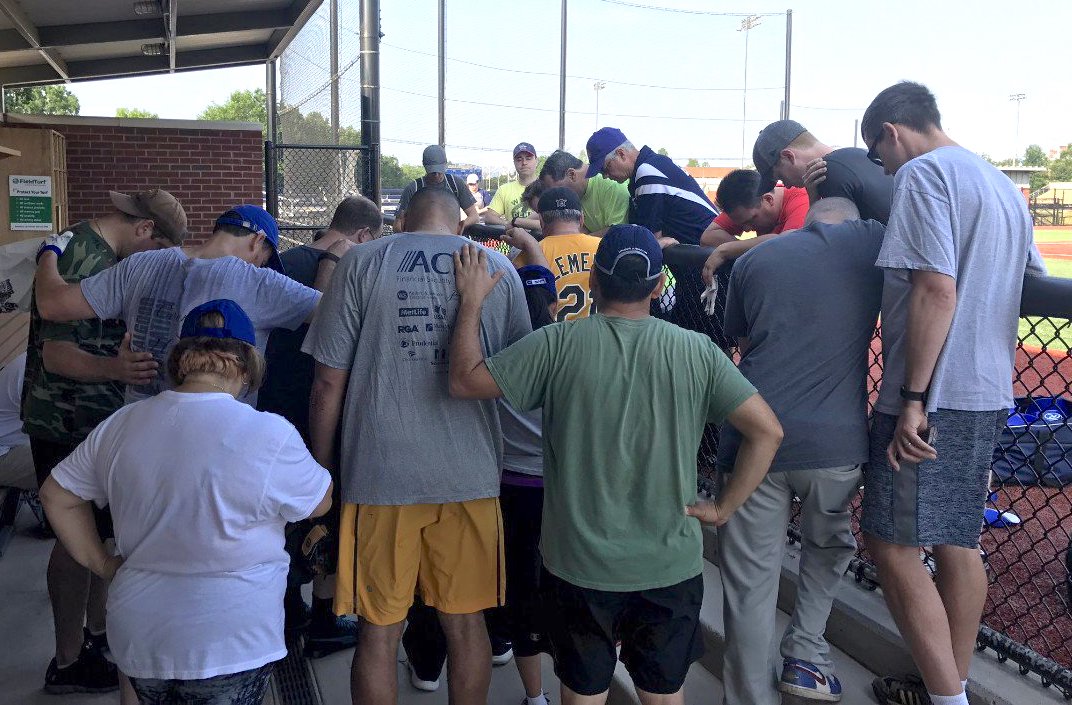 Democrats huddle to pray for those shot at a Republican practice for the annual, bipartisan congressional baseball game. The Democrats were practicing at a separate location. The picture was tweeted by Rep, Ruben Kihuen of Nevada.