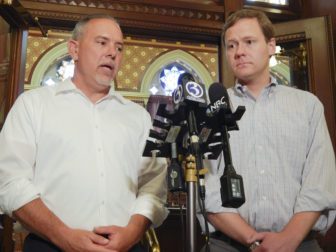 As legislators struggle to find enough spending cuts to offset a major projected deficit, House Democrats continue to talk about increasing one of the state’s two major taxes — the sales levy.

But while House Democratic leaders acknowledged Thursday that hiking the sales tax rate to 6.99 percent was discussed in a closed-door meeting of caucus members, they also said this would only be considered to mitigate deep and painful cuts proposed for municipal aid.

“Revenues have never been taken off of the table,” Aresimowicz told Capitol reporters. “We’ve said it consistently since the beginning of February.”

“Our members are flexible, they’re open-minded, but everybody’s aware that every week that goes by it gets a lot harder for towns,” Ritter said. “We’re trying to mitigate the damage to the municipalities.”

But House Democratic leaders said a sales tax hike is far from a sure thing as lawmakers and the governor continue to struggle over how to close huge projected shortfalls in the next two-year budget.

Surging retirement benefit and other debt costs, coupled with eroding income tax receipts are responsible for much of that red ink.

But after major state tax hikes in 2011 and 2015, legislators from both parties as well as the Democratic governor have tried to avoid raising tax rates — particularly when it comes to the income and sales taxes.

But with retirement benefit and debt cost increases largely fixed by contract, the single-largest pot of money that could be cut — more than $3 billion in operating grants to cities and towns — is arguably the most politically sensitive.

All outstanding budget proposals include cuts both to previously approved increases in town grants as well as to existing aid programs.

And the governor also wants cities and towns to cover nearly one-third of the state’s annual contribution to the teachers’ pension fund in each of the next two fiscal years, $400 million annually.

Aresimwicz said boosting the 6.35 percent sales tax rate to 6.99 percent would yield about $460 million in annual revenue. This could be used to avoid the teacher pension bills the governor suggests, or to mitigate other proposed cuts to town grants.

Ritter said if any sales tax increase is planned to bolster cities and towns, House Democrats believe those communities effectively should have to endorse the tax increase to get the funds.

House Democratic leaders have said on several occasions that their members fear Republicans will not vote for any budget, given the difficult choices needed to close the projected deficits.

But the legislature, and not local governments, has sole authority to order a sales tax hike. So local boards effectively would be voting simply to accept a check from the state.

So if Republican legislators won’t vote for tax increases, would Democrats gain any political cover in the 2018 state elections if local town councils and boards of finance have to vote to accept the revenues from a state sales tax hike? 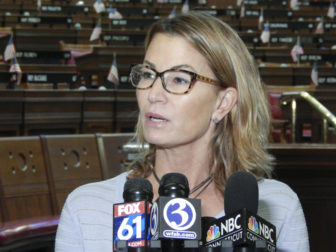 “The reason you see almost a tie in this chamber and a tie in the Senate is because people are paying very close attention to who is doing what, who’s affecting their lives in such a detrimental way,” House Minority Leader Themis Klarides, R-Derby, said.

“This state is just too taxed,” she said. “We spend too much money. We borrow too much money, and there is no structural change.”

House Democratic leaders will meet with their Senate counterparts on Friday to discuss budget proposals. A meeting of top lawmakers from both parties is scheduled for Monday morning, to be followed by a second meeting between that group and the governor.

Aresimowicz said he expects House members will be at the Capitol next Thursday, June 29.

If a new budget is ready for consideration, it could be adopted then. Legislators also could consider a temporary budget plan if they want to employ that option rather than ask the governor to run the state’s finances by executive order, the speaker said.

Aresimowicz also conceded Thursday that proposals to authorize tolls are unlikely to make it into any final budget adopted for the next two fiscal years.

“That process is going to be a little slowed down,” he said. “Clearly we are going to have to come back next year … to get the tolls moving.”