Malloy, unions agree on sending tentative concessions to a vote 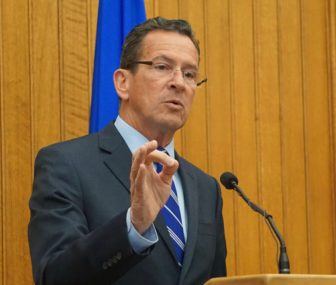 A tentative concessions framework between Gov. Dannel P. Malloy and state employee unions took a step forward Monday with the news that all bargaining units have agreed to submit the proposed concessions to a vote by rank-and-file members.

Ballots are expected to be cast in mid- or late July.

“The agreement by the unions to move forward with a tentative contract that could save the state more than $24 billion is a promising step, clearly demonstrating that they want to be part of the solution to putting the state in a better and more stable financial position,” Malloy said.

The concessions, projected to be worth $1.57 billion over the next two fiscal years, play a crucial role in separate plans developed by Malloy and Democratic legislative leaders to close large projected budget deficits.

Legislators and the governor already have conceded they may enter the new fiscal year on Saturday without an adopted budget. Officials have said they want to have a plan in place before union members vote. An adopted budget, some say, would place more pressure on workers to agree to concessions.

The tentative deal struck by Malloy and the State Employees Bargaining Agent Coalition would save $24.1 billion over the next two decades, according to analyses prepared by the administration, Connecticut pension actuaries and its healthcare consultant.

“Connecticut’s state budget needs serious people willing to make serious change, and thus far, SEBAC has answered the call,” Malloy said. “There are still several steps remaining, but it is truly a credit to our partners that the rhetoric surrounding the deal did not stifle their willingness to help.”

But Republican legislative leaders have said they won’t support the concessions package because it would extend the benefits program for five more years, through 2027.

Even if the proposed changes are made, Connecticut still would require future generations of taxpayers to cover a significant portion of the costs of benefits promised to present-day workers.

The concessions framework would freeze wages for each of the next two fiscal years. Employees, most of whom are working this fiscal year under contracts that expired last June, also would forfeit any retroactive pay hike.

The cumulative three-year wage freeze would provide nearly half of the total projected savings over the next two fiscal years, providing $769 million in relief.

Workers would receive 3.5 percent pay hikes in 2020 and in 2021, and also would be eligible for step increases.

State workers would be required to take three furlough days, saving the state another $36 million.

Senate Republican leader Len Fasano of North Haven has proposed a series of changes to collective bargaining rules that could be legislated — and that he estimates would save just over $1.9 billion in the coming biennium without extending the benefits package.

Malloy and his fellow Democrats in legislative leadership have said they would not consider making such changes through statutes immediately after negotiating in good faith with union officials.

Democrats have not said what they would consider, though, if unions fail to ratify the concessions plan.