McConnell has about $200B in ‘candy’ to sweeten Obamacare repeal 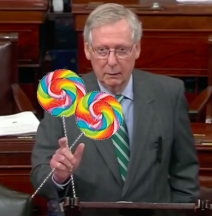 Senate Majority Leader Mitch McConnell can afford to give back $200 billion in deficit savings to sweeten the Obamacare repeal.

Washington — The path to 50 votes for an Obamacare replacement bill seemed to narrow dramatically Thursday as efforts to craft a quick compromise foundered — but Senate Majority Leader Mitch McConnell has $200 billion to build a bridge to victory. His dealmaking may be just beginning.

While many policy experts, lobbyists and senators Kaiser Health News spoke to this week seemed skeptical that the Better Care Reconciliation Act could be saved, they said they could envision a way for McConnell, R-Ky., to succeed in crafting a bill that would partially replace the Affordable Care Act.

McConnell has significant wiggle room in his repeal bill. Under the budget rules he is using to move the legislation, he needs to reach $133 billion in deficit reduction over 10 years. The Congressional Budget Office estimated that the BCRA would save $321 billion.

That leaves about $200 billion in deficit savings that McConnell can afford to give back and use to make deals with as many as a dozen senators who oppose his draft bill.

“There’s clearly a path to do this,” said Matt Salo, the executive director of the National Association of Medicaid Directors. “McConnell has enough candy to do it, and enough time. It’s still a very real possibility.”

Figuring out exactly how to spread the confectionery around, though, is no simple matter.

The key problem for the bill is very similar to the one that nearly brought down the House version of similar legislation: Conservatives want to repeal more of Obamacare and do it quickly while more centrist Republicans are worried about the damage that would be done by extracting $772 billion from Medicaid and eliminating popular consumer protections for health insurance.

To start with, moderate senators such as Rob Portman, R-Ohio; Shelley Moore Capito, R-W.Va.; Lisa Murkowski, R-Alaska; and Susan Collins, R-Maine, all want the expansion of Medicaid under Obamacare preserved or at least rolled back much more gently than the Senate and House bills propose. And they want to preserve treatment dollars for the opioid crises raging through their states. Two Republican senators up for re-election in tight races next year — Dean Heller in Nevada and Jeff Flake in Arizona — have similar concerns.

“Obviously, anybody who had expanded the Medicaid population wants some kind of softer landing than is outlined. That’s a biggie,” said Flake.

But even a senator from deeply conservative Kansas, Sen. Jerry Moran, opposed the bill’s draconian cuts, which likely would punish the rural hospitals in his state.

All of them need money added back to Medicaid, especially after a new CBO analysis released Thursday said the program’s cuts jump from 25 percent after the first 10 years to a staggering 35 percent in the second decade.

They also have concerns about provisions that would allow states to waive minimum standards in the ACA, including its essential health benefits and protections for people with preexisting conditions.

On the conservative side, the pressure has been on to cut taxes established by the health law, and to roll back insurance regulations, so that states could craft whatever rules they want. The House repeal bill would let states get waivers for the 10 essential benefits in Obamacare. Sen. Ted Cruz, R-Texas, sponsored an amendment that goes further and would let insurers directly offer plans that don’t comply with the ACA standards as long as they also offered one plan that did in the affected state.

These competing interests would seem to be diametrically opposed. But McConnell’s ability to tap that $200 billion could go a long way to ease the friction, and Sen. Mike Rounds, R-S.D., stepped forward Wednesday and Thursday to suggest which tax cut to forgo — a politically toxic one that primarily benefits the rich. That’s the 3.8 percent net investment tax on families that earn more than $250,000.

Not only would this provide McConnell with an additional $172 billion for his dealmaking, it would mute Democrats’ criticism of the bill as a mechanism to reward rich Republican donors while depriving poorer Americans of health care.

How McConnell doles out that largesse is another part of the puzzle. Capito and Portman had asked for $45 billion to fight the opioid crisis that is so critical to Ohio, West Virginia and other states, and aides speaking on background say they are likely to get it.

Senators like Flake, Moran and Heller could certainly be tempted by easing the blow to Medicaid and, in spite of long styling themselves as fiscal conservatives, could keep a tax hike in place.

“That’s not the issue Nevada’s worried about,” said Heller, referring to the taxes. “It’s insurance for poor people.”

Even Sen. Ron Johnson, R-Wis., who initially aligned himself against the Senate bill with Cruz and Sens. Rand Paul, R-Ky., and Mike Lee, R-Utah, sounded open to Rounds’ idea.

“We’re $20 trillion in debt, so I think we should seriously consider retaining some of the tax revenue that funds the subsidies,” Johnson told reporters as he fast-walked to a closed-door meeting of the GOP caucus with Vice President Mike Pence on Thursday.

On the conservative side, even Lee suggested he was sensitive to the charge that Republicans were cutting taxes for the rich to stiff the poor. But Cruz hasn’t said he would be willing to keep the taxes in place. Pressed by reporters Thursday on whether the tax was a deal killer for him, he strolled onto an elevator and stayed deliberately silent as he waited for the doors to close.

There are some other levers McConnell has, but they are issues unrelated to the health bill. McConnell and senators would have to act as if it is not quid pro quo. For instance, Murkowski might be swayed by an offer of an unrelated bill to open the Arctic National Wildlife Refuge to oil drilling. (She laughed when a reporter made that suggestion earlier this year but didn’t say she’d turn it down.) Heller is locked in a battle with the administration to ensure that the Yucca Mountain nuclear waste storage facility never opens in his state. McConnell’s support for keeping it closed would appeal to him, although it would be hard for him to brag about it later in connection to the health bill.

One Republican health care lobbyist and former Capitol Hill aide said the behavior of the conservatives showed that if the bill is to pass, they will have to cave.

“The conservatives are going to have to capitulate a long way, but when they do that, are they getting anything in return?” the lobbyist said.

What they could get in return is some version of Cruz’s amendment, but the lobbyist and others noted it could not be as extreme, since essential health benefits and protections for people with preexisting conditions were among the top concerns for Senate moderates when the House passed its bill.

Several GOP insiders and a couple of Democrats said it would still be a stretch to get to the 50-vote mark, but none would rule it out.

Speaking privately so they could be candid, aides from both parties saw similar political downsides for Republicans. One senior Democratic aide summed it up succinctly.

“We suffered for a few cycles over health care, but at least we had people who could talk about it who were helped,” the aide said. “They won’t have that.”

Still, the GOP remains committed to trying to fulfill the pledge they’ve made for seven years, and even vulnerable senators like Flake were not giving up.

“We’ve still got a long way to go, I think,” Flake said. “In some ways, we’re going around in circles, but I think we’re getting closer on some elements.”

Flake said the lawmakers were sending various amendments that contain those elements to the CBO and expected to have numbers back next week while the Senate is on recess. Those numbers will be crucial.

This story was first published June 30, 2017, by Kaiser Health News (KHN), a national health policy news service. It is an editorially independent program of the Henry J. Kaiser Family Foundation.