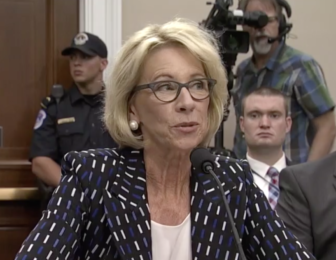 Washington – Connecticut joined 17  other states and the District of Columbia Thursday to sue the U.S. Department of Education and Secretary Betsy DeVos for delaying implementation of a new regulation aimed at protecting student borrowers. It was to become effective on July 1.

The lawsuit, joined by Connecticut Attorney General George Jepsen and 18 other Democratic attorneys general, alleges that DeVos and the Department of Education violated federal law by abruptly rescinding its Borrower Defense Rule, which was designed to protect students from abusive higher education institutions.

“For several years now, Connecticut has been involved in a multi-state investigation of the predatory practices of certain for-profit colleges and universities,” Jepsen said. “Our investigation, as well as inquiries conducted by Congress, have demonstrated how some of these institutions seek to maximize their access to federal taxpayer dollars by luring in students with misleading promises about the quality of the education they will receive and the prospects for their futures following completion of a program. These students end up in crushing debt, with worthless diplomas, while the for-profit colleges rake in exorbitant profits on the taxpayer dime.”

The Borrower Defense Rule  was finalized by the Obama administration in November of 2016 after nearly two years of negotiations, following the collapse of Corinthian Colleges, a national for-profit chain.

With the new rule, the Obama administration aimed to make it easier for defrauded student-loan borrowers to seek debt forgiveness. The rule also would prohibit colleges from requiring students to resolve complaints against their school through arbitration rather than in court.

The Department of Education said it delayed implementation of the rules because of a legal challenge to them by a California association representing for-profit colleges and would begin a process to rewrite them later this year.

Department of Education spokeswoman Liz Hill said it was necessary to “hit the pause button” on the regulations because the  California Association of Private Postsecondary Schools made “makes serious and credible charges” against the regulations and “the Department cannot simply dismiss these allegations.”

“With this  ideologically driven suit, the state attorneys general are saying to regulate first, and ask the legal questions later—which also seems to be the approach of the prior administration that adopted borrower-defense regulations through a heavily politicized process and failed to account for the interests of all stakeholders,” Hill said.

But Jepsen said the delay in implementing the student loan regulations violated the Administrative Procedures Act “because it effectively canceled a properly promulgated regulation without soliciting, receiving or responding to any comment from any stakeholder or member of the public, and without engaging in a public deliberative process.”

Of the five national for-profit colleges with campuses in Connecticut, Lincoln College, Sanford Brown College and the University of Pheonix were highlighted in a 2012 report by the Senate Health, Education, Pensions and Labor Committee for high loan default rates, overly aggressive marketing and recruitment, subpar graduation rates and graduates’ earnings.

The lawsuit says for-profit schools receive the vast majority of their revenue from the federal government in the form of federal student loans and grants and that in 2009, the 15 publicly traded for-profit education companies received 86 percent of their revenues from taxpayer-funded loans.