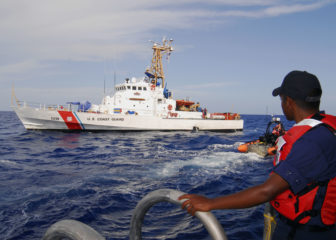 Washington – When the USS Fitzgerald collided with a container ship off the coast of Japan last month, resulting in the deaths of seven American sailors, the U.S. Coast Guard was dispatched to investigate the incident.

That’s a recent example of the Coast Guard’s expanding mission, which ranges from search and rescue operations to drug interdiction and counterterrorism.

The Coast Guard even has a role in protecting the president during Donald Trump’s frequent trips to Mar-a-Lago, a private club in Palm Beach, Fla., patrolling the area by boat and helicopter.

But the Coast Guard’s widening mission – which has not been matched by increases in budget – has left its leaders questioning whether they can fully accomplish their missions.

During a recent congressional hearing on the Coast Guard budget, which has largely remained flat at about $10 billion for years, Admiral Paul Zukunft said the force prides itself on being Semper Paratus – Always Ready. But the commander of the Coast Guard warned “predictable and sufficient funding is necessary to maintain this readiness in the future.”

Zukunft said that in 2016, the Coast guard interdicted more cocaine at sea than was confiscated at U.S. borders and across the entire nation by all federal, state and local law enforcement agencies combined. The service seized a record 201 metric tons of cocaine and detained 585 smugglers last year, he said. Intelligence gleaned from those interdictions helped lead to the extradition of dozens of Columbian cartel leaders.

The missions of Connecticut’s two Coast Guard stations, in New Haven and New London, are focused largely on search and rescue and coastal security, but are also sometimes tasked to do other things, such as provide boat “safety zones” for fireworks and other events on Long Island Sound.

There are about 550 Coast Guard personnel stationed at these stations — Connecticut is also home to the Coast Guard Academy — and thousands of volunteers help the service as Coast Guard auxiliary members.

While the Connecticut Coast Guard’s missions are limited, its duties are also growing. Boatswain Mate 2nd Class Patrick White of the New London station said “the entire Coast Guard is hurting” because of budget constraints.

“Our service has always been asked to do more with less,” White said.

In a different league

Rep. Joe Courtney, D-2nd District, co-chair of the Congressional Coast Guard Caucus, is among dozens of lawmakers who will try to boost the Coast Guard’s budget this year.

“They do a great job, but they are strained,” Courtney said.

Earlier this year, a number of lawmakers, including Courtney and Sens. Richard Blumenthal and Chris Murphy, signed letters to Trump and Mick Mulvaney, the head of the Office of Management and Budget, to protest a proposed cut to the Coast Guard budget in Trump’s outline for his first federal budget.

“We are concerned that the Coast Guard would not be able to maintain its maritime presence, respond to individual and national emergencies, and protect our nation’s economic and environmental interests,” Courtney’s letter said.

The Trump administration backed off on cutting the Coast Guard budget, which had been part of a plan to find money to boost the Pentagon budget and begin construction of a wall between the United Stated and Mexico.

The final Trump budget left fiscal year 2018 funding for the Coast Guard level with this year’s and  2.4 percent less than the service received in 2016, when its budget rose by about $640 million to purchase a new National Security Cutter.

Meanwhile, the Trump administration and key congressional committees are seeking to sharply increase funding for the Navy, Army and Air Force.

“When compared to the other branches, (the Coast Guard) is in a different league,” Courtney said.

“We are a branch of the Armed Forces of the United States at all times,” Zukunft told lawmakers at the budget hearing. “I am proud of our enduring defense contributions to Combatant Commanders around the globe.”

Trump’s budget would increase the number of active duty troops by 42,800, but increase the Coast Guard by only 370.

“Their portfolio is expanding and it’s hard to see how they will cover all the jobs without more personnel,” Courtney said.

While there are some new Coast Guard cutters, many others in the fleet are more than 50 years old.

Courtney and others are looking to find money for the Coast Guard in other places, including the Pentagon’s budget.

They are trying to secure funding for a new Coast Guard icebreaker to replace an aging one stationed at the Arctic, from money appropriated but not spent in certain Department of Defense accounts — other than the shipbuilding account.

The provision, put in the House version of the 2018 National Defense Authorization Act, also would task the Navy to act as a contracting agent for the Coast Guard to procure three heavy icebreakers and three medium icebreakers.