Sen. Chris Murphy argues against repeal of the Affordable Care Act on the Senate floor in January.

Washington – Sen. Chris Murphy and two of his Democratic colleagues in the Senate, are questioning whether Health and Human Services Secretary Tom Price misused taxpayer money through advertising and public relations efforts aimed at undermining the Affordable Care Act.

In a letter that was also signed by Sens. Brian Schatz, D-Hawaii, and Cory Booker, D-N.J., Murphy asked Price to detail how much money HHS is spending to produce and distribute dozens of anti-Obamacare videos available on the department’s official social media accounts.

The senators questioned the legality of using taxpayer money to lobby for the replacement and repeal of the Affordable Care Act.

“We are concerned that the use of appropriated funds to promote legislation pending before Congress violate both HHS’s constitutional responsibility to implement existing law, and legal prohibitions against using taxpayer dollars to lobby in favor of pending legislation,” the senators wrote. “The ACA is the law of the land, and HHS officials have an obligation to uphold and implement it.”

In their letter, the senators also cited several federal laws that prohibit lobbying by federal employees and the use of public funds to lobby for legislation, including the Anti-Lobbying Act which the senators said, states:

“No part of the money appropriated by any enactment of Congress shall, in the absence of express authorization by Congress, be used directly or indirectly to pay for any personal service, advertisement, telegram, telephone, letter, printed or written matter, or other device, intended or designed to influence in any manner a Member of Congress, a jurisdiction, or an official of any government, to favor, adopt, or oppose, by vote or otherwise, any legislation, law, ratification, policy or appropriation . . .”

The anti-ACA videos, testimonies from patients and doctors critical of Obamacare, display the HHS logo and at the end say “Produced at U.S. taxpayer expense.” 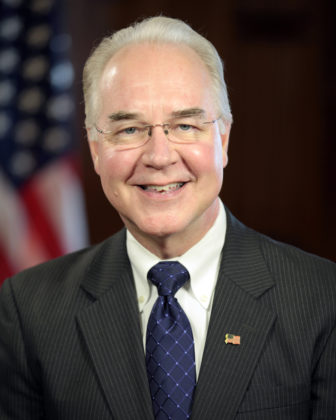 Office of the president-elect

Some question whether an ACA outreach fund meant to encourage signup was used to pay for the ad campaign.

HHS did not respond to a request for comment on the senators’ letter.

Murphy has been one of the most vigorous defenders of the Affordable Care Act in the Senate, frequently making floor speeches that include stories of people in Connecticut who have been helped by the health care law.

Murphy also has launched furious tweet-storms against GOP efforts to repeal and replace the Affordable Care Act, efforts that have stalled because they have failed to win the support of 50 senators needed for approval.

Nevertheless, Senate Majority Leader Mitch McConnell plans to bring up a health care bill this week, with a vote on a procedural motion on Tuesday. McConnell has not said what that bill will look like.